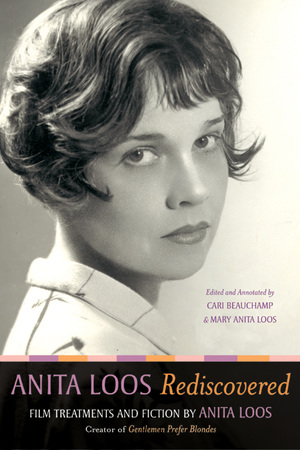 Anita Loos (1888-1981) was one of Hollywood's most respected and prolific screenwriters, as well as an acclaimed novelist and playwright. This unique collection of previously unpublished film treatments, short stories, and one-act plays spans fifty years of her creative writing and showcases the breadth and depth of her talent. Beginning in 1912 with the stories she submitted from her San Diego home (some made into films by D. W. Griffith), through her collaboration with Colette on the play Gigi, Anita Loos wrote almost every day for the screen, stage, books, or magazines. Film scripts include San Francisco, The Women, and Red-Headed Woman. The list of stars for whom she created unforgettable roles includes Mary Pickford, Jean Harlow, Clark Gable, Audrey Hepburn, and Carol Channing.

This collection has been selected by Anita's niece and close friend, the best-selling author Mary Anita Loos, together with the acclaimed film historian Cari Beauchamp. Their essays are laced throughout the volume, introducing each section and giving previously untold insights and behind-the-scenes stories about Anita—her life, her friendships, and her times.

“Long before Helen Fielding’s Bridget Jones became the prototype for the hapless-career-girl heroin, Anita Loos regaled readers with her fabulous, far more entertaining, and unselfconscious cosmopolitan dames. This collection of Loos’s film treatments and stories, as well as biographical pieces, is an insightful chronicle of her career.”—Film Comment

“Editors Beauchamp and Loos have done tremendous work, both in making their selections and in conducting the numerous interviews that have filled out their understanding of Anita Loos and her time. Beauchamp’s comments are enlightening but never intrusive, useful for helping readers to develop their own conclusions about Loos’s life and work. Mary Anita Loos’s memoirs about her aunt are loving but honest. She provides a picture of Anita Loos that helps related the writer’s life to her work.”—Journal Of Film & Video

"I adored Anita, as did the entire fashion and literary world. She was four feet nine inches of lithe, slender, dramatic chic."—Carol Channing


"This book celebrates a character as memorable as any Anita Loos created in her writing. She was an indomitable, wise-cracking prodigy who not only helped create Hollywood, but managed to survive it."—John Sayles

"If we can't have the wonderful Anita Loos-smart, witty, literate and fun- writing today's Hollywood movies, at least we can get reacquainted with her and her work through this delightful book. Filled with previously unpublished material, it shows that while gentlemen may have preferred blondes, everyone else in town wisely preferred the irresistible Ms. Loos."—Kenneth Turan, film critic for the Los Angeles Times

"This is a wonderful book about a talented, fascinating, and groundbreaking woman. Her life epitomizes a certain era in show business and describes a Hollywood in which few women were allowed to rise to the top. Anita Loos did and we were all the beneficiaries. I loved the book!"—Peter Duchin

"Not only is it valuable to have these delightful Anita Loos pieces, but the biographical chapters are fascinating too."—Kevin Brownlow, author of David Lean: A Biography

ANITA LOOS AND HER STORIES FROM SAN DIEGO, 1888–1915
The School of Acting
The Highbrow
Plagiarism
The Man Who Looked Up
By Way of France
Jane Wins Out
A Ride with Billy

HOLLYWOOD SUCCESSS AND INTERNATIONAL FAME, 1915–1930
The Heart That Has Truly Loved
Play for Mr. Fairbanks
All Men Are Equal
Where Does Annie Belong?
The Moving Pictures of Blinkville
My First Memories of Aunt Anita
Mary Anita Loos