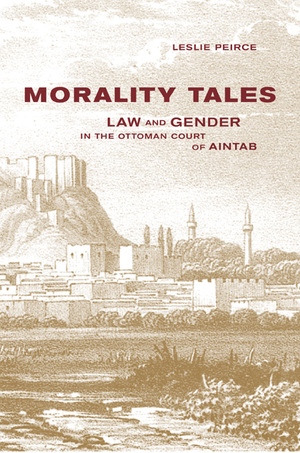 Morality Tales Law and Gender in the Ottoman Court of Aintab

In this skillful analysis, Leslie Peirce delves into the life of a sixteenth-century Middle Eastern community, bringing to light the ways that women and men used their local law court to solve personal, family, and community problems. Examining one year's proceedings of the court of Aintab, an Anatolian city that had recently been conquered by the Ottoman sultanate, Peirce argues that local residents responded to new opportunities and new constraints by negotiating flexible legal practices. Their actions and the different compromises they reached in court influenced how society viewed gender and also created a dialogue with the ruling regime over mutual rights and obligations. Locating its discussion of gender and legal issues in the context of the changing administrative practices and shifting power relations of the period, Morality Tales argues that it was only in local interpretation that legal rules acquired vitality and meaning.

Leslie Peirce is Professor of History and Near Eastern Studies at the University of California, Berkeley, and author of The Imperial Harem: Women and Sovereignty in the Ottoman Empire (1993).

"Leslie Peirce has produced a meticulously researched and gloriously imagined work of historical scholarship. Her deep familiarity with the city of Aintab (today’s Gaziantep) shines through on every page as she recreates the world of the city and its inhabitants in the middle of the sixteenth century. Using a wide variety of sources, Peirce departs from state-centered approach of much of Ottoman historiography and asks instead how individuals understood themselves and their place in Ottoman society. Her answers take us into areas of Ottoman society that are still obscure. We see Aintabans grappling with issues of class, morality, heresy, and the differences between men and women. Throughout, Peirce excavates the complicated relationship between a society that understands itself as Islamic but whose sources of meaning and order are not confined to the religious tradition."—Molly Greene, Princeton University

"This is another masterpiece that will, like Leslie Peirce’s first book, become a classic. Once again, she shows a special talent for raising relevant issues that have remained unexplored and shedding light on older issues with illuminating interpretations. . . . The heterogeneity of law and the variability of justice emerge clearly, as do the flexibility and fluidity of legal practices, justice as a process not a structure, and law as a product of debate among providers and users."—Lucette Valensi, author of La Fuite en Egypte: Histoires d'Orient et d'Occident, 2002


"Leslie Peirce guides the reader through the Anatolian town of Aintab, twenty-five years after its incorporation into the Ottoman Empire. Using the local court records for the year 1540-1541 and the fascinating accounts of women talkingæsometimes even shouting and cursingætheir way into court, she reveals the intricacies of the legal system at the crossroads of imperial law and local custom. . . . Morality Tales is a must for Ottomanists, to whom it will offer a truly innovative methodology and a brilliant portrayal and analysis of this complex and fascinating period. More important, however, this book will reveal to a wider audience that Ottoman history has a lot to contribute to the understanding of early modern society and politics."—Edhem Eldem, Bogaziçi University, Istanbul
Read More >

Introduction
Part I. The Setting: Aintab and Its Court
1. Locating Aintab in Space and Time
2. The People of Aintab and Their World
3. Introducing the Court of Aintab
Part II. Gender and the Terrain of Local Justice
Idne’s Story: A Child Marriage in Trouble
4. Gender, Class, and Social Hierarchy
5. Morality and Self-Representation at Court
6. Women, Property, and the Court
Part III. Law, Community, and the State
Haciye Sabah’s Story: A Teacher on Trial
7. Negotiating Legitimacy through the Law
8. Punishment, Violence, and the Court
Part IV: Making Justice at the Court of Aintab
Fatma’s Story: The Dilemma of a Pregnant Peasant Girl
Conclusion