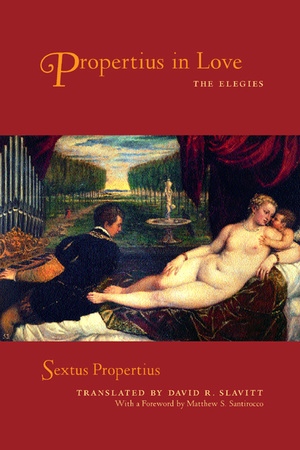 Propertius in Love The Elegies

David R. Slavitt is a member of the faculty at Bennington College and is the author of acclaimed translations of Virgil, Ovid, Seneca, Aeschylus, and Aristophanes, as well as Solomon Ibn Gabirol and the biblical Book of the Twelve Prophets, among other translations and many books of poetry.

"Goethe, whose Roman Elegies drew on him, recognized in Propertius a romantic sensibility akin to his own. Ezra Pound's Homage to Sextus Propertius, on the other hand, read the poet as a fellow satirist and political dissident. Whatever the merits of these, and other, competing interpretations, Propertius has by now certainly come into his own, acquiring a whole new generation of readers. Indeed, in his 1997 play about the scholar-poet Housman, Tom Stoppard suggests that Propertius is one of the poets who were responsible for "the invention of love" in the West. The occasion of a lively new version by the poet David Slavitt invites a reexamination of Propertius, with particular attention to what most recommends him to us today: his sophisticated exploration of love and gender relations, his difficult--we might almost say modernist poetics, his strikingly independent politics that are concomitant with an overriding commitment to love and to literature, and, finally, his attempt later in life to reinvent himself and his art."—from the foreword by Matthew S. Santirocco, New York University

"David Slavitt's bold, bawdy, expansive and sinewy version of Propertius is a sleep stealer, a book of wonders that bursts through limitations and the concept of "enough." Slavitt's continually startling Propertius in Love brings to mind Pasternak's line that "the root of beauty is audacity." Through the dialectic of eros and mortality and the marriage of poet and translator, Latin and English, we are hurtled back to the site where the invention of love is reenacted."—Mark Rudman, winner of National Book Critics Circle Award for his poetic trilogy, Rider, The Millennium Hotel, and Provoked in Venice. His latest book is The Couple. 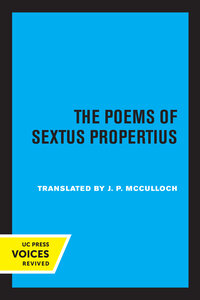 The Poems of Sextus Propertius