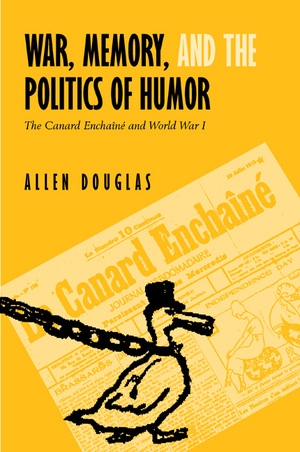 War, Memory, and the Politics of Humor The Canard Enchaîné and World War I

War, Memory, and the Politics of Humor features carnage and cannibalism, gender and cross-dressing, drunks and heroes, militarism and memory, all set against the background of World War I France. Allen Douglas shows how a new satiric weekly, the Canard Enchaîné, exploited these topics and others to become one of France's most influential voices of reaction to the Great War. The Canard, still published today, is France's leading satiric newspaper and the most successful periodical of the twentieth century, and Douglas colorfully illuminates the mechanisms of its unique style.

Following the Canard from its birth in 1915 to the eve of the Great Depression, the narrative reveals a heady mix of word play, word games, and cartoons. Over the years the journal--generally leftist, specifically antimilitarist and anti-imperialist--aimed its shots in all directions, using some stereotypes the twenty-first century might find unacceptable. But Douglas calls its humor an affirmation of life, and as such the most effective antidote to war.

List of Illustrations
Preface and Acknowledgments
Introduction: War, Lies, and Newsprint
1. Satire and Censorship
2. Verbal and Visual, Humor and Politics: Organization as Discourse
3. Unstuffing Skulls: The Canard versus the Mass Press
4. The Tears of L’Intran: Semiotic Hijacking and Wartime Anxieties
5. Soldiers versus Profiteers: Class War as Patriotism
6. In Vino Veritas: De la Fouchardière, Bicard, and the Politics of Inebriation
7. Peace or Postwar: The Next Last War
8. Web of Memory
9. Between Cannibalism and Resurrection: The Body of the Unknown Soldier
10. Anti-Imperialism and Its Stereotypes: War in the Colonies
11. Politics as Usual: An Antiparliamentarism of the Left?
12. Canard Economics, or the Costs of the War
13. The Wealth of Nations
14. Conclusion: Politics of Humor, Politics of Memory
Notes
Index 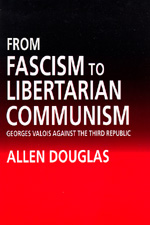 From Fascism to Libertarian Communism