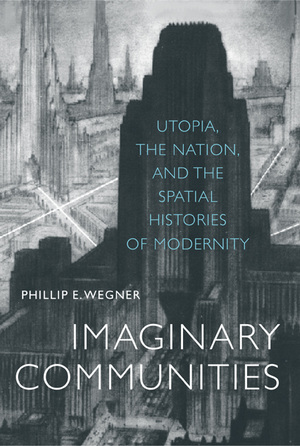 Imaginary Communities Utopia, the Nation, and the Spatial Histories of Modernity

Drawing from literary history, social theory, and political critique, this far-reaching study explores the utopian narrative as a medium for understanding the social space of the modern nation-state. Considering the narrative utopia from its earliest manifestation in Thomas More's sixteenth-century work Utopia to some of the most influential utopias of the late nineteenth and twentieth centuries, this book is an astute study of a literary genre as well as a nuanced dialectical meditation on the history of utopian thinking as a quintessential history of modernity.

Phillip E. Wegner is Associate Professor of English at the University of Florida.

"Imaginary Communities is a beautiful treatment of utopian narratives as the quintessential genre for figuring social space in the modern nation-state. Wegner demonstrates a wide-ranging yet lighthanded philosophical learnedness, an urgent political conscience, and a deeply historical sense that narrative utopias are like specters that haunt particular moments of upheaval, crisis, and contradiction within modernity: whether the threshold between the vestiges of feudal agrarian society and early modern English capitalism, conflicts between the new oligarchy of industrializing late 19th c. United States and the increasing militancy of the labor movement, the uneven successes and failures of the Russian Revolution of 1905, or the mid-century Cold War struggles."—Lisa Lowe, author of Immigrant Acts: On Asian American Cultural Politics

"In this important book, Wegner argues that the historical work done by utopian narratives should be reconsidered, interrogated, challenged—and continued. Insightful and provocative, Imaginary Communities will prove a valuable contribution to our thinking about the politics of imagination."—Daniel Cottom, author of Cannibals and Philosophers: Bodies of Enlightenment

"Phillip Wegner's Imaginary Communities represents a major intervention in our understanding not merely of utopian literature, but the very ways in which we view our world. His concept of utopian narrative as both vision and practice, as participating in "real" worlds, a force for change rooted in the social world "as it is" and as it is becoming and is "imagined," succeeds wonderfully well; his notion of the imperative of "failure" as a resource of hope is deeply humane. He provides a body of work worth thinking through and thinking with. As a historian, I find the historicity of his approach, the literary arch spanning from the origins of the European nation-state to our global present and future, compelling in its ambition and execution. Wegner moves well beyond the more tired moves of "new historicist" literary criticism: this is historicist scholarship in a new key."—James Epstein, author of Radical Expression: Political Language, Ritual, and Symbol in England, 1790-1850

Acknowledgments
Introduction: The Reality of Imaginary Communities
1. Genre and the Spatial Histories of Modernity
The Institutional Being of Genre
Space and Modernity
Estrangement and the Temporality of Utopia
2. Utopia and the Birth of Nations
Re-authoring, or the Origins of Institutions
Utopiques and Conceptualized Space
Crime and History
Utopia and the Nation-Thing
Utopia and the Work of Nations
3. Writing the New American (Re)Public: Remembering and Forgetting in Looking Backward
Remembering
The Contemporary Cul-de-Sac
Fragmentation
Consumerism and Class
"The Associations of Our Active Lifetime"
Forgetting
4. The Occluded Future: Red Star and The Iron Heel as "Critical Utopias"
Red Star and the Horizons of Russian Modernity
The Long Revolution of The Iron Heel
"Nameless, Formless Things"
"Gaseous Vertebrate"
Simplification and the New Subject of History
5. A Map of Utopia’s "Possible Worlds": Zamyatin’s We and Le Guin’s The Dispossessed
Reclaiming We for Utopia
The City and the Country
Happiness and Freedom
The Play of Possible Worlds
We’s Legacy: The Dispossessed and the Limits of the Horizon
6. Modernity, Nostalgia, and the Ends of Nations in Orwell’s Nineteen Eighty-Four
From Utopian Modernism to Naturalist Utopia
Orwell and Mannheim: Nineteen Eighty-Four as "Conservative Utopia"
The Crisis of Modern Reason
Modernization against Modernity: The Culture Industry and "Secondary Orality"
"If there was hope. . .": Orwell’s Intellectuals
Notes
Index