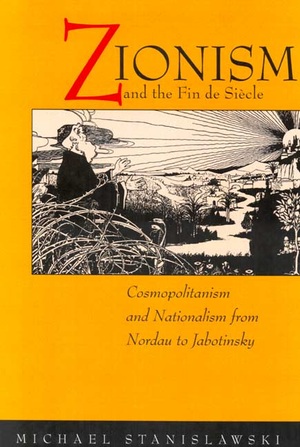 Michael Stanislawski's provocative study of Max Nordau, Ephraim Moses Lilien, and Vladimir Jabotinsky reconceives the intersection of the European fin de siècle and early Zionism. Stanislawski takes up the tantalizing question of why Zionism, at a particular stage in its development, became so attractive to certain cosmopolitan intellectuals and artists. With the help of hundreds of previously unavailable documents, published and unpublished, he reconstructs the ideological journeys of writer and critic Nordau, artist Lilien, and political icon Jabotinsky. He argues against the common conception of Nordau and Jabotinsky as nineteenth-century liberals, insisting that they must be understood against the backdrop of Social Darwinism in the West and the Positivism of Russian radicalism in the fin de siècle, as well as Symbolism, Decadence, and Art Nouveau.

When these men turned to Zionism, Stanislawski says, far from abandoning their aesthetic and intellectual preconceptions, they molded Zionism according to their fin de siècle cosmopolitanism. Showing how cosmopolitanism turned to nationalism in the lives and work of these crucial early Zionists, this story is a fascinating chapter in European and Russian, as well as Jewish, cultural and political history.

Michael Stanislawski is Nathan J. Miller Professor of Jewish History at Columbia University. His previous books include Psalms for the Tsar (1988) and For Whom Do I Toil? (1988).

"Stanislawski shows that each of these three [Nordau, Lilien, and Jabotinsky] came to Zionism out of engagement with the larger issues that preoccupied intellectuals and artists at the turn of the century and that the adoption of Jewish nationalism was by no means a foregone conclusion or an inevitable trajectory. The chapters are written in a lively and accessible style."—David Biale, author of Eros and the Jews

"Stanislawski has literally rewritten the early history of Zionism. . . . [His] discovery and masterly use of Nordau's correspondence with Olga Novikova and his treatment of Jabotinsky's youthful journalistic sallies are models of lucid and absorbing historical analysis."—Derek. J. Penslar, author of Shylock's Children