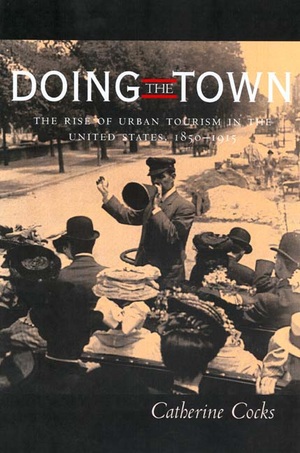 Tourists and travelers in the early nineteenth century saw American cities as ugly spaces, lacking the art and history that attracted thousands to the great cities of Europe. By the turn of the century, however, city touring became popular in the United States, and the era saw the rise of elegant hotels, packaged tours, and train travel to cities for vacations that would entertain and edify. This fascinating cultural history, studded with vivid details bringing the experience of Victorian-era travel alive, explores the beginnings of urban tourism, and sets the phenomenon within a larger cultural transformation that encompassed fundamental changes in urban life and national identity.

Focusing mainly on New York, San Francisco, Washington, D.C., and Chicago, Catherine Cocks describes what it was like to ride on Pullman cars, stay in the grand hotels, and take in the sights of the cities. Her evocative narrative draws on innovative readings of sources such as guidebooks, travel accounts, tourist magazines, and the journalism of the era. Exploring the full cultural context in which city touring became popular, Cocks ties together many themes in urban and cultural history for the first time, such as the relationships among class, gender, leisure, and the uses and perceptions of urban space. Offering especially lively reading, Doing the Town provides a memorable journey into the experience of the new urban tourist at the same time as it makes a sophisticated contribution to our understanding of the urban and cultural development of the United States.

Catherine Cocks is an independent scholar who received her Ph.D. from the University of California, Davis.

"Catherine Cocks has provided a new and fascinating look at cities. Rather than merely places to live and work, cities take shape as places to visit. Deeply researched, Doing the Town engagingly reveals how cities--once seen as suspect and dangerous--became comfortable and entertaining vacation destinations. Most importantly, Cocks persuasively argues, the growth of urban tourism helped to erode Victorian culture and fashion a modern America."—Cindy S. Aron, author of Working at Play: A History of Vacations in the United States

"Doing the Town is a major contribution to the history of urban recreational travel and sightseeing in the United States. It provides richly detailed accounts of the ways tourism shaped American cities in the second half of the 19th century. "—Dean MacCannell, author of The Tourist: A New Theory of the Leisure Class

"Cocks' study of the rise of commericalized urban tourism throws light upon a long neglected chapter in the social history of travel; but more importantly, in the course of charting the emergence of a new style of 'spatial practice,' Cocks has new and interesting tales to tell on the history of American cities, consumer cultures, nationalist ideologies, and ethnicities."—Judith Adler, author of "Travel as a Performed Art," American Journal of Sociology

List of Illustrations
Acknowledgments
Introduction
1. Strangers and Visitors; Or, The Impossibility of Tourism in American Cities, 1830s-1870s
"Leisure Is the Parent of Mischief"
"Localities and Objects of Interest"
2. Refining Travel: Railroads and Extra-Fare Cars, 1850-1915
"Vexations and Annoyances"
Democratic Luxury
3. At Home in the City: First-Class Urban Hotels, 1850-1915
"The Tangible Republic"
Masters and Servants
4. "Why Not Visit Chicago": Tour Companies and City Business Organizations, 1870-1915
"The Raw and the Cook'd"
Selling the City
5. "An Individuality All Its Own": Tourist City and Tourist Citizens, 1876-1915
Urban Personality and the Tourist
Creating Urban Landscapes
6. "The Noble Spectacle": Historical Walking Tours and Ethnic Slumming, 1890s-1915
"A Sweet and Stately Epic"
"A Panopticon of Peep Shows"
Conclusion: A Nice Place to Visit
Notes
Bibliographic Essay
Index