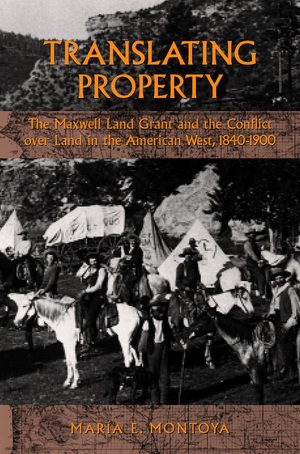 Translating Property The Maxwell Land Grant and the Conflict over Land in the American West, 1840-1900

Although Mexico lost its northern territories to the United States in 1848, battles over property rights and ownership have remained intense. This turbulent, vividly narrated story of the Maxwell Land Grant, a single tract of 1.7 million acres in northeastern New Mexico, shows how contending groups reinterpret the meaning of property to uphold their conflicting claims to land. The Southwest has been and continues to be the scene of a collision between land regimes with radically different cultural conceptions of the land's purpose.

We meet Jicarilla Apaches, whose identity is rooted in a sense of place; Mexican governors and hacienda patrons seeking status as New World feudal magnates; "rings" of greedy territorial politicians on the make; women finding their own way in a man's world; Anglo homesteaders looking for a place to settle in the American West; and Dutch investors in search of gargantuan returns on their capital. The European and American newcomers all "mistranslated" the prior property regimes into new rules, to their own advantage and the disadvantage of those who had lived on the land before them. Their efforts to control the Maxwell Land Grant by wrapping it in their own particular myths of law and custom inevitably led to conflict and even violence as cultures and legal regimes clashed.

María E. Montoya is Associate Professor of History at the University of Michigan.

"Translating Property is a very important and timely contribution to the historiography of the American West. It is a splendid study of the role of U.S. courts in consolidating colonialism, explicated through highly textured and nuanced narrative, and supported by reams of fastidious historical research. Translating Property is one of the finest examples of historical prose I have read, extending our understanding of the racial and gender aspects of law. This is the historian's craft at its best."—Ramón Gutiérrez, author of When Jesus Came the Corn Mothers Went Away

"Translating Property is a unique and important contribution to the history of the American West and to Chicano History, both in situating the land grant and its people in the context of the rise of global capitalism and European imperialism, and in recognizing the complexity and multiplicity of ethnic and racial divisions and unities"—Sarah Deutsch, author of Women and the City: Gender, Space and Power in Boston (1870-1940) and No Separate Refuge: Culture, Class and Gender on an Anglo-Hispanic Frontier in the American Southwest (1880-1940)

Introduction
1. Contested Boundaries
2. Regulating Land, Labor, and Bodies: Mexican Married Women, Peones, and the Remains of Feudalism
3. From Hacienda to Colony
4. Prejudice, Confrontation, and Resistance: Taking Control of the Grant
5. The Law of the Land: U.S. v. Maxwell Land Grant Company
6. The Legacy of Land Grants in the American West