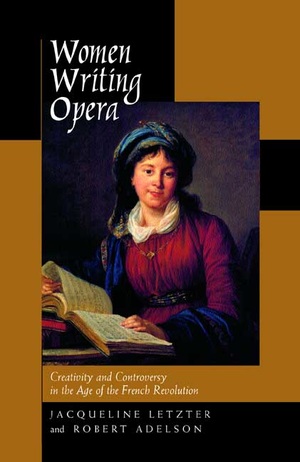 In the age of the French Revolution, opera was the locus of cabals, intrigues, and violent journalistic invective. Yet it was also a period when women composers and librettists gained access to concert halls as never before, some of their works among those most performed in Paris. Jacqueline Letzter and Robert Adelson's engaging history explains what made this possible. At the same time it demonstrates how the Revolution fostered many dreams and ambitions for women that would be doomed to disappointment in the repressive post-Revolutionary era.

The first part of the book concentrates on the women who succeeded in bringing their operas to the stage. The authors examine their backgrounds, the institutional barriers they had to surmount, and the problems they faced in asserting their authority and authorship. The book's second half is a detailed case study of Isabelle de Charrière (1740–1805), a prolific author and composer who witnessed the success of her female colleagues but was unable to gain recognition for herself. In an analytical epilogue Letzter and Adelson discuss the status of creative women in Revolutionary culture and society.

"This book opens many doors, not simply those that reveal the work of women writers and composers in post-Revolution France... There is more than fine sociology and musicology here: real music is at the heart of the matter."—Christopher Hogwood, Director of the Academy of Ancient Music

"Letzer and Adelson bring vividly to life a moment in cultural production unknown to most of us, and they help us understand more fully both the general problems confronting women artists and the specific conditions of this particular time and place. We now have theoretically informed studies of the careers of only a few female composers before 1900; Women Writing Opera greatly enriches our knowledge."—Susan McClary, author of Conventional Wisdom

List of Illustrations
Acknowledgments
Introduction
Part One
1. The Authors
2. Education
3. The Politics of Opera
4. Authority and Identity
Part Two
5. The Career Manqué of Isabelle de Charrière: A Case Study
Epilogue: The Problem of the Exceptional Woman
Appendix: Operas by Women Composers and Librettists, 1670–1820
Notes
Bibliography
Index