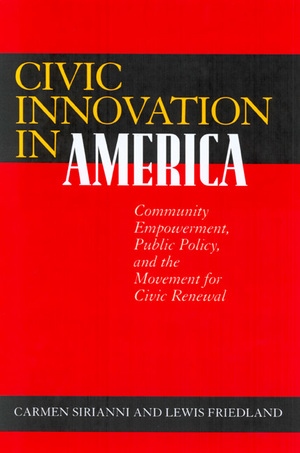 In this book, two leading experts on community action provide the first scholarly examination of the civic renewal movement that has emerged in the United States in recent decades. Sirianni Friedland examine civic innovation since the 1960s as social learning in four arenas (community organizing/development, civic environmentalism, community health, and public journalism), and they link local efforts to broader networks and to the development of "public policy for democracy." They also explore the emergence of a movement for civic renewal that builds upon the civic movements in these four arenas.

In contrast to some recent studies that stress broad indicators of civic decline, this study analyzes innovation as a long process of social learning within specific institutional and policy domains with complex challenges and cross-currents. It draws upon analytical frameworks of social capital, policy learning, organizational learning, regulatory culture, democratic theory, and social movement theory. The study is based upon interviews with more than 400 innovative practitioners, as well as extensive field observation, case study, action research, and historical analysis.

Carmen Sirianni is Professor of Sociology and Public Policy at Brandeis University. He is the editor of Working in the Service Society (1996) and Critical Studies in Organization and Bureaucracy (1994). Lewis Friedland is Associate Professor of Journalism and Mass Communication at the University of Wisconsin, Madison, and author of Covering the World: International Television News Services (1993).

"A new philosophy of organizing is afoot in the land. It works with, as well as opposing, City Hall. It forms ongoing relationships. It takes the long view. It works from the bottom up. It deliberates about ends and means. It crafts voluntary agreements. It fosters common work. After reading this book, you think, 'Maybe we are entering a new era of citizen activism and self-government.' We've learned. I recommend this book to any activist, and to anyone who wants to understand activism in America."—Jane Mansbridge, Adams Professor of Political Leadership and Democratic Values, John F. Kennedy School of Government, Harvard University

"This book is an extraordinarily useful and comprehensive account of the wave of renewal that is occurring in the United States today. . . . Americans should read this excellent book."—John Gardner, founder of Common Cause and former U.S. Secretary of Health, Education, and Welfare

"Civic Innovation in America by Carmen Sirianni and Lewis Friedland is a wonderful book, rich in insights and stories of the growth of civic learning, dazzling in its facility with issues of contemporary democratic and social theory. It is also a book of democratic hope. As the authors weave together an account of the steady accumulation of learning that has developed over the last generation, they also help to give this growing movement depth and visibility and self-consciousness. Civic Innovation in America not only chronicles the broad and diverse stirrings of a movement for democratic revitalization, it aids in bringing the movement into being. It could not come at a more crucial time."—Harry Boyte, Co-Director, Center for Democracy and Citizenship, University of Minnesota


"This book offers a fresh, innovative approach to social movements, especially with its focus on the emergence of partnership strategies (as distinct from more purely adversarial strategies). The book reminds us of the importance of designing public policies that build civic capacity. There is important and insightful information here for scholars, agency professionals, and community activists alike."—Anne Schneider, Dean of the College of Public Programs at Arizona State University

"Civic Innovation in America is a remarkably detailed catalog of major efforts at civic renewal in health, the environment, journalism, and community organizing—taking place in scores of cities and towns around the country in the past 20 years. Yes—vital, innovative, in-the-trenches civic work in the midst of the Reagan-Bush-New-Democrat era. To document these efforts and to persuasively show in them common origins, common patterns, and common problems is a civic achievement in itself. Sirianni and Friedland not only describe important social change but contribute to it."—Michael Schudson, Professor of Communication, University of California, San Diego
Read More >