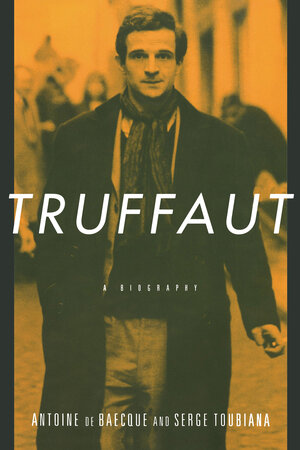 One of the most celebrated filmmakers of all time, Francois Truffaut was an intensely private individual who cultivated the public image of a man completely consumed by his craft. But his personal story—from which he drew extensively to create the characters and plots of his films—is itself an extraordinary human drama. Now, with captivating immediacy, Antoine de Baecque and Serge Toubiana give us the definitive story of this beloved artist.

They begin with the unwanted, mischievous child who learned to love movies and books as an escape from sadness and confusion: as a boy, Francois came to identify with screen characters and to worship actresses. Following his early adult years as a journalist, during which he gained fame as France's most iconoclastic film critic, the obsessive prodigy began to make films of his own, and before he was thirty, notched the two masterpieces The 400 Blows and Jules and Jim. As Truffaut's dazzling body of work evolves, in the shadow of the politics of his day, including the student uprisings of 1968, we watch him learning the lessons of his masters Fellini and Hitchcock. And we witness the progress of his often tempestuous personal relationships, including his violent falling-out with Jean-Luc Godard (who owed Truffaut the idea for Breathless) and his rapturous love affairs with the many glamorous actresses he directed, among them Jacqueline Bisset and Jeanne Moreau. With Fanny Ardant, Truffaut had a child only thirteen months before dying of a brain tumor at the age of fifty-two.

Here is a life of astonishing emotional range, from the anguish of severe depression to the exaltation of Oscar victory. Based on unprecedented access to Truffaut's papers, including notes toward an unwritten autobiography, de Baecque and Toubiana's richly detailed work is an incomparably authoritative revelation of a singular genius.

Antoine do Baecque is Professor of History at the University of Saint Quentin in Yvelynes, France. Serge Toubiana has headed Cahiers du Cinéma since 1981. In 1993, he codirected a documentary titled François Truffaut: Stolen Portraits.

"Riveting and relevatory. . . . An engrossing study of a complex artist."—Los Angeles Times

The Films of Francois Truffaut

1. A CLANDESTINE CHILDHOOD: 1932-1946
The Secret Child
My Grandfather, a Prim Disciplinarian
My Mother
Truancy and Lies
Lachenay, the Friendfriendfriend
I Sevigne, You Sevigne
The Story of a Cheat
Summer Camps
War Is a Theater

3. LIFE WAS THE SCREEN: 1952-1958
At the Bazins'
The Time of Contempt
The Yoi.tng Turks
Press Campaigns
A Hussar with His Sword Drawn
First Footage
Truffette and Rivaut
I Admire You . . .
Ophuls
Rossellini
The Auteur Theory
Venice 56
Henri-Pierre Roche
Making a Film
Bernadette's Skirt
The Film of Tomorrow Will Be an Act of Love
If Guitry Were Told to Me
Vadim Right on Time
The Mischief Makers
Madeleine
Putting an End to Criticism

4. NEW WAVE: 1958-1962
Days of Heat
Antoine's Truancy
The Festival of Child Prodigies
An Easy Target
Family Wound
A New Life
Parallel Families
Foreign Correspondents
Paris Belongs to Us
Friends First
The Story of a Shy Person
Goodis Queneau-Style
The American Friend
The Algerian Tragedy
The Manifesto of the 121
They Shoot at the Piano Player
The Greatest Sweetheart
Wavering Wave
The Whirlwind of Life
This Pure Triangular Love
The Women Cry
A Musical Infatuation
The Trial of the New Wave

5. THE SLOW YEARS: 1962-1968
Science Fiction
Hitchcock
Trip to Tokyo
The Soft Skin
The Thick Skin
The Separation
Bonnie and Clyde
Degrees Fahrenheit
The ForestofBook-Men
The Hitchbook
Deathly Pale Thriller
The Colors of the Bride
Framboise

6. PARALLEL LIVES: 1968-1971
Detective Doinel
Scandal at the Cinematheque 2
Vive Langlois!
Curtains in Cannes
The Family Saga
What Is Left of Our Loves?
Belle de Nuit
The Mississippi Crew
The Wild Child
The Carrosse Keeps Rolling
Scenes from a Marriage
The Cause of Children
The New Renoir
Sartre's Cause
Breakups Are Necessary

7. CINEMA MAN: 1971-1979
Two English Girls
The Female Hoodlum
Day for Night 2
Like a Train Going Along in the Night
The Confrontation
Private Lives
The California Summer
Political Columns
Isabelle's Face
Small Change
A Man Who Would Have the Soul of a Child
A Solitary Hunter
Living with One's Dead
The Empty Room
Love on the Run

8. THE UNFINISHED FIGURE: 1979-1984
Theater During the Nazi Occupation
Another Double
The Best Novel of the Year
Ten Cesars
Sauve qui peut (l'amitie) ... or Salvaging a Friendship
Neither with You Nor without You
A Singular Couple
On the Sidelines
Confidentially Yours!
Fanny in Black and White
The Last Vacation
Observing Silence
Life Regardless
The Diminished Life
The Farewell Cererrwny