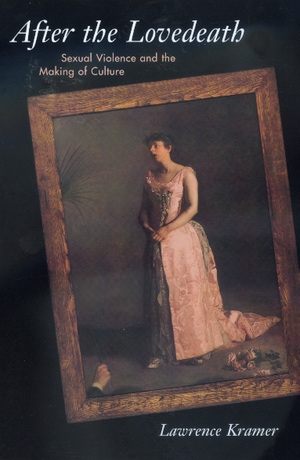 After the Lovedeath Sexual Violence and the Making of Culture

This elegantly written book is a bold attempt to reinterpret the nature of sexual violence and to imagine the possibility of overcoming it. Lawrence Kramer traces today's sexual identities to their nineteenth-century sources, drawing on the music, literature, and thought of the period to show how normal identity both promotes and rationalizes violence against women.

To make his case, Kramer uses operatic lovedeaths, Beethoven's "Kreutzer Sonata" and the Tolstoy novella named after it; the writings of Walt Whitman and Alfred Lord Tennyson, psychoanalysis, and the logic of dreams. In formal and informal reflections, he explores the self-contradictions of masculinity, the shifting alignments of femininity, authority, and desire, and the interdependency of hetero- and homosexuality. At the same time, he imagines alternatives that could allow gender to be freed from the existing system of polarities that inevitably promote sexual violence.

Kramer's writing avoids the conventional dress of intellectual authority and moves between music and literature in a style that is both intimate and effective. He combines informed scholarship with candid personal utterance and makes clear what is at stake in this crucial debate. After the Lovedeath will have a profound impact on anyone interested in new ways to think about gender.

Lawrence Kramer is Professor of English and Music at Fordham University. He has published three previous books with California: Music and Poetry: The Nineteenth Century and After (1984), Music as Cultural Practice, 1800-1900 (1990), and Classical Music and Postmodern Knowledge (1995). All are available in paperback.

"In this brilliant extended essay, Lawrence Kramer once again brings his formidable skills as a literary critic and musicologist to bear on nineteenth-century culture. . . . As always, Kramer surprises his readers with bold new insights; he compels us to return to poems, stories, and sonatas we thought we knew."—Susan McClary, author of Feminine Endings

"This book makes its readers understand the stakes of a crucial debate while itself raising that debate to a higher stage. Its powerful, original vision of gender informs remarkable readings of individual texts. The style, uniquely personal and invariably effective, often reaches a level of eloquence rare in academic prose. Kramer has a distinctive voice and uses it to dramatic effect."—Sandy Petrey, author of Speech Acts and Literary Theory

"Enormously important. . . . [This book] takes a crucial next step from previous cultural-critical work. Its determination to speak directly to the problem of sexual violence by way of certain cultural products—rather than the other way around, as countless previous authors have done—is a weird and wonderful gesture. I wouldn't have thought it could be done, but I find quite persuasive Kramer's demonstration that readings like these can authorize such a diagnosis."—Ruth A. Solie, editor of Musicology and Difference