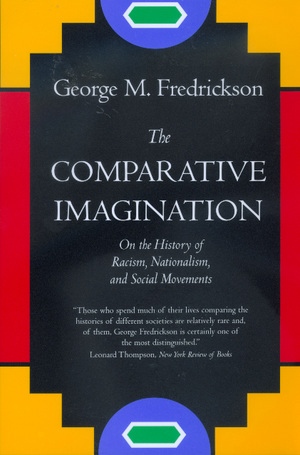 The Comparative Imagination On the History of Racism, Nationalism, and Social Movements

In this collection of essays, an eminent American historian of race relations discusses issues central to our understanding of the history of racism, the role of racism, and the possibilites for justice in contemporary society. George M. Fredrickson provides an eloquent and vigorous examination of race relations in the United States and South Africa and at the same time illuminates the emerging field of comparative history—history that is explicitly cross-cultural in its comparisons of nations, eras, or social structures. Taken together, these thought-provoking, accessible essays—several never before published—bring new precision and depth to our understanding of racism and justice, both historically and for society today.

The first group of essays in The Comparative Imagination summarizes and evaluates the cross-national comparative history written in the past fifty years. These essays pay particular attention to comparative work on slavery and race relations, frontiers, nation-building and the growth of modern welfare states, and class and gender relations. The second group of essays represents some of Fredrickson's own explorations into the cross-cultural study of race and racism. Included are new essays covering such topics as the theoretical and cross-cultural meaning of racism, the problem of race in liberal thought, and the complex relationship between racism and state-based nationalism. The third group contains Fredrickson's recent work on anti-racist and black liberation movements in the United States and South Africa, especially in the period since World War II.

In addition, Fredrickson's provocative introduction breaks significant new intellectual ground, outlining a justification for the methods of comparative history in light of such contemporary intellectual trends as the revival of narrative history and the predominance of postmodern thought.

George M. Fredrickson is Robinson Professor of United States History at Stanford University, and author of several books, including Black Liberation: A Comparative History of Black Ideologies in the United States and South Africa (1995), The Arrogance of Race: Historical Perspectives on Slavery, Racism, and Social Inequality (1988), The Black Image in the White Mind (1987), and White Supremacy: A Comparative Study in American and South African History (1981). He was president of the Organization for American Historians for 1997-98.

"By using an ever-widening comparative method, Fredrickson is able to illustrate the depth of institutional and intellectual incorporation of racism, and he keeps alive the possibility of moral and political reform."—Thomas Bender, New York University