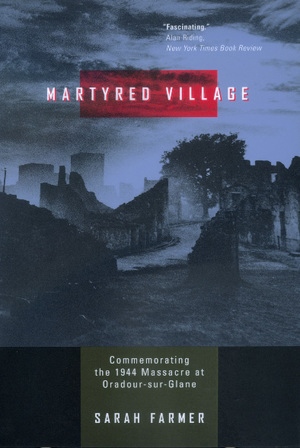 Among German crimes of the Second World War, the Nazi massacre of 642 men, women, and children at Oradour-sur-Glane on June 10, 1944, is one of the most notorious. On that Saturday afternoon, four days after the Allied landings in Normandy, SS troops encircled the town in the rolling farm country of the Limousin. Soldiers marched the men to nearby barns, lined them up, and shot them. They then locked the women and children in the church, shot them, and set the building and the rest of the town on fire. Residents who had been away for the day returned to a blackened scene of horror, carnage, and devastation.

In 1946 the French State expropriated and preserved the entire ruins of Oradour. The forty acres of crumbling houses, farms and shops became France's village martyr, set up as a monument to French suffering under the German occupation. Today, the village is a tourist destination, complete with maps and guidebooks.

In this first full-scale study of the destruction of Oradour and its remembrance over the half century since the war, Sarah Farmer investigates the prominence of the massacre in French understanding of the national experience under German domination. Through interviews with survivors and village officials, as well as extensive archival research, she pieces together a fascinating history of both a shattering event and its memorial afterlife.

Complemented by haunting photographs of the site, Farmer's eloquent dissection of France's national memory addresses the personal and private ways in which, through remembrance, people try to come to terms with enormous loss. Martyred Village will have implications for the study of the history and sociology of memory, testimonies about remembrances of war and the Holocaust, and postmodern concerns with the presentation of the past.

Sarah Farmer is Associate Professor of History, University of Iowa, and author of Oradour: Arrêt sur mémoire, published in France in 1994.

Chapter One
The Massacre