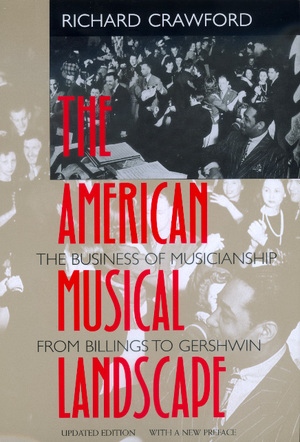 The American Musical Landscape The Business of Musicianship from Billings to Gershwin, Updated With a New Preface

In this refreshingly direct and engaging historical treatment of American music and musicology, Richard Crawford argues for the recognition of the distinct and vital character of American music. What is that character? How has musical life been supported in the United States and how have Americans understood their music? Exploring the conditions within which music has been made since the time of the American Revolution, Crawford suggests some answers to these questions.

Surveying the history of several musical professions in the United States—composing, performing, teaching, and distributing music—Crawford highlights the importance of where the money for music comes from and where it goes. This economic context is one of his book's key features and gives a real-life view that is both fascinating and provocative. Crawford discusses interconnections between classical and popular music, using New England psalmody, nineteenth-century songs, Duke Ellington, and George Gershwin to illustrate his points.

Because broad cultural forces are included in this unique study, anyone interested in American history and American Studies will find it as appealing as will students and scholars of American music.

Richard Crawford is Professor of Music at the University of Michigan. His writings have won awards from the American Musicological Society, the Sonneck Society for American Music, and the Music Library Association.

"This book reflects a breakthrough in American music studies, an unrecognized field among traditional musicologists until the past few decades, during which enormous progress has been made in documenting three centuries of American musical activities and figures. Time and effort had to be expended exclusively on the development of basic historical studies. The time has come for a new phase, one that can take a creative, interpretive approach. Professor Crawford's study will introduce this higher level of scholarship into the field of American music studies."—Vivian Perlis, author of Charles Ives Remembered

"A major statement by a senior scholar on what American musicology is all about. . . These themes are also topical; they come at a time when much more research is being done in American music, but little thought is being given to the big picture, the vision, the philosophy, and the implications of historical research. Now is the time for a synthesis, and there are few scholars better equipped to do that in American music than Richard Crawford."—Michael Broyles, author of Music of the Highest Class