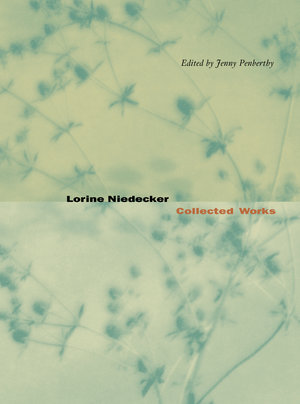 "The Brontës had their moors, I have my marshes," Lorine Niedecker wrote of flood-prone Black Hawk Island in Wisconsin, where she lived most of her life. Her life by water, as she called it, could not have been further removed from the avant-garde poetry scene where she also made a home. Niedecker is one of the most important poets of her generation and an essential member of the Objectivist circle. Her work attracted high praise from her peers--Marianne Moore, William Carlos Williams, Louis Zukofsky, Cid Corman, Clayton Eshleman--with whom she exchanged life-sustaining letters. Niedecker was also a major woman poet who interrogated issues of gender, domesticity, work, marriage, and sexual politics long before the modern feminist movement. Her marginal status, both geographically and as a woman, translates into a major poetry.

Niedecker's lyric voice is one of the most subtle and sensuous of the twentieth century. Her ear is constantly alive to sounds of nature, oddities of vernacular speech, textures of vowels and consonants. Often compared to Emily Dickinson, Niedecker writes a poetry of wit and emotion, cosmopolitan experimentation and down-home American speech.

This much-anticipated volume presents all of Niedecker's surviving poetry, plays, and creative prose in the sequence of their composition. It includes many poems previously unpublished in book form plus all of Niedecker's surviving 1930s surrealist work and her 1936-46 folk poetry, bringing to light the formative experimental phases of her early career. With an introduction that offers an account of the poet's life and notes that provide detailed textual information, this book will be the definitive reader's and scholar's edition of Niedecker's work.

"This Collected Works should succeed, at long last, in establishing Niedecker as one of the most important and original poets of this past century and in bringing her work into the mainstream, where it belongs."—London Review of Books

"Numerous contemporary avant-garde poets cite the influence of the Objectivists, and yet they remain under-studied and under-appreciated. This collection should help to rectify the oversight by making one of the movement's key players more accessible."—Rain Taxi Review Of Books

“Having all of Niedecker in one place, as it has never been collected before, is a great moment.”—Philadelphia Inquirer

"...this comprehensive collection of all of Niedecker's surviving verse includes her well-known New Goose folk poems, as well as early poetry that Niedecker had omitted from the collected works published in her lifetime. It is an indispensable book for anyone interested in modernist writing."—Publishers Weekly

"Rarely does a single volume of poetry radically change the prevailing view of its author. Lorine Niedecker: Collected Works, superbly edited by Jenny Penberthy, is such a book. It is, at last, the long-awaited necessity: an accurate, reliable, full text of this important modernist writer’s oeuvre. Its value is not to be underestimated."—Jacket2

"This is an excellent, and for this reader, an essential publication."—Oyster Boy Review

"Lorine Niedecker proves a major poet of the 20th century, just as Emily Dickinson was for the 19th. Bleak indeed that both should have been so curiously overwritten and ignored, when their work defined the time in which they lived with such genius. Jenny Penberthy has provided an excellent text and a comprehensive, detailing introduction. Finally, we have the collected poems of that poet whom her peers thought the very best of their company. Now one can know why."—Robert Creeley, The Collected Poems of Robert Creeley, 1945-1975

"Lorine Niedecker was neither a Sappho nor an Emily Dickinson. She was a mid-western-born, self-created modernist who worked as a librarian, a floor-scrubber, a WPA writer, a housewife; and whose acrid, vitally alive poems earned her the admiration and friendship of her poetic peers."—Adrienne Rich, author of Diving into the Wreck

"Like the other poets associated with the Objectivist movement, Lorine Niedecker's work is quiet, original, and exact. She's as much of her place, that watery world of the Wisconsin lake country, as any American writer and as quirky as the best of them."—Robert Hass, former Poet Laureate of the United States

"If she lacks the epigrammatist's cutting assurance, Niedecker's semblance of unpreparedness may make for a greater precision of statement: Kenneth Cox says it all when he describes her setting one thing alongside another with 'the tremulous certainty of a compass needle.'"—Thom Gunn, author of Boss Cupid

NOTES AND CONTENTS LISTS
INDEX OF TITLES OR FIRST LINES