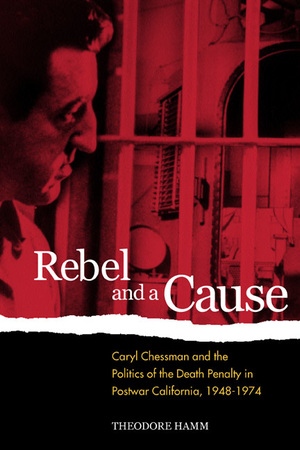 Rebel and a Cause Caryl Chessman and the Politics of the Death Penalty in Postwar California, 1948-1974

Theodore Hamm uses the 1960 execution of Caryl Chessman as a lens for examining how politics and debates about criminal justice became a volatile mix that ignited postwar California. The effects of those years continue to be felt as the state's three-strikes law and expanding prison-construction program spark heated arguments over rehabilitation and punishment.

Known as the Red Light Bandit, Chessman allegedly stalked lovers' lanes in Los Angeles. Eventually convicted of rape and kidnapping, he was sentenced to death in 1948. In prison he gained significant notoriety as a writer, beginning with his autobiographical Cell 2455 Death Row (1954). In the following years Chessman presented himself not only as an innocent man but also as one rehabilitated from his prior life of crime. He acquired an enthusiastic audience among leading criminologists, liberal intellectuals, and ordinary citizens, many of whom engaged in protests to halt Chessman's execution. Hamm analyzes how Chessman convinced thousands of Californians to support him, and why Governor Edmund G. (Pat) Brown, who opposed the death penalty, allowed the execution to go forward. He also demonstrates the intrinsic limits of the popular commitment to the rehabilitative ideal.

Rebel and a Cause places the Chessman case in a broad cultural and historical context, relating it to histories of prison reform, the anti-death penalty movement, the popularization of psychology, and the successive rise and decline of the New Left and the more enduring rise of the New Right.

Theodore Hamm has written about criminal justice for The Los Angeles Times, The Nation, American Quarterly, and Souls. He currently teaches in the Metropolitan Studies Program at New York University.

“Rebel With a Cause is well-written, ‘thick history.’”—Journal Of The West

"Fast paced and elegantly crafted, Theodore Hamm's Rebel and a Cause demands our attention. This deft historical analysis of the famous Chessman case and of the entire spectrum of political and cultural struggle surrounding capital punishment should be read by lay people and experts alike. Rigorously researched, superbly argued, this book -unfortunately - becomes all the more relevant with each new execution."—Christian Parenti, author of Lockdown America: Police and Prison in the Age of Crisis

"Historians of the American 1960s have begun to attend to the previously-neglected topic of "crime in the streets." In the long run, the demand from the Right for "Law and Order!" may have done more to shape the history of subsequent decades than the better-known demands from the Left for "Freedom Now!" and "Peace in Vietnam!" In his crisply-written and subtly nuanced study Rebel and a Cause, Theodore Hamm shows how California death row inmate Caryl Chessman became the unlikely flashpoint for a series of passionate confrontations between advocates and opponents of the death penalty, as well as between the New Right, the New Left, and the liberal establishment."—Maurice Isserman, author of America Divided: The Civil War of the 1960s


"This book is a must read for anyone interested in the current death penalty debate."—George T. Davis, former counsel to Caryl Chessman
Read More >