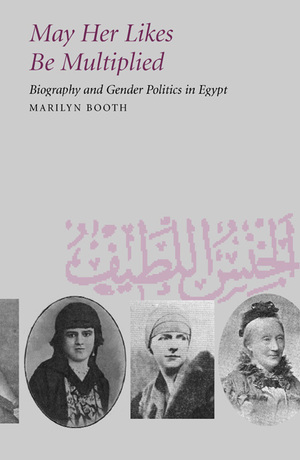 May Her Likes Be Multiplied Biography and Gender Politics in Egypt

Marilyn Booth's elegantly conceived study reveals the Arabic tradition of life-writing in an entirely new light. Though biography had long been male-authored, in the late nineteenth century short sketches by and about women began to appear in biographical dictionaries and women's journals. By 1940, hundreds of such biographies had been published, featuring Arabs, Turks, Indians, Europeans, North Americans, and ancient Greeks and Persians. Booth uses over five hundred "famous women" biographies—which include subjects as diverse as Joan of Arc, Jane Austen, Aisha bt. Abi Bakr, Sarojini Naidu, and Lucy Stone—to demonstrate how these narratives prescribed complex role models for middle-class girls, in a context where nationalist programs and emerging feminisms made defining the ideal female citizen an urgent matter.

Booth begins by asking how cultural traditions shaped women's biography, and to whom the Egyptian biographies were directed. The biographies were published at a time of great cultural awakening in Egypt, when social and political institutions were in upheaval. The stories suggested that Islam could be flexible on social practice and gender, holding out the possibility for women to make their own lives. Yet ultimately they indicate that women would find it extremely difficult to escape the nationalist ideal: the nuclear family with "woman" at its center. This conflict remains central to Egyptian politics today, and in her final chapter Booth examines Islamic biographies of women's lives that have been published in more recent years.

Marilyn Booth is an independent scholar affiliated with the Program in Comparative Literature and the Center for African Studies at the University of Illinois, Urbana-Champaign. She is the author of Bayram al-Tunisi's Egypt (1990) and translator of My Grandmother's Cactus: Stories by Egyptian Women (1991) and other Arabic fiction and memoirs.