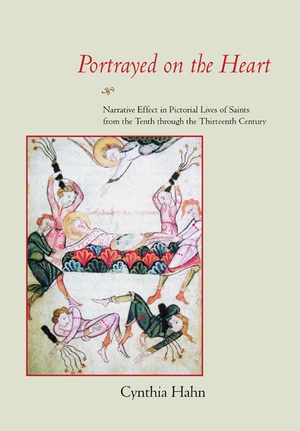 Hagiography, or writing about and illustrating the lives of saints, was one of the most creative areas for artistic inspiration in the literature and arts of the Middle Ages. This book explores the sumptuously illustrated saints' lives that were made in medieval Europe. Cynthia Hahn discusses a broad range of manuscripts and other artifacts, many of which are reproduced here, and provides an analysis of their pictorial and narrative structure. Hahn's book is a virtual compendium of images-many rarely published-as well as a learned study that deepens our understanding of the role of various types of saints, the nature of their audience, and the historical moment when individual works were produced.

After two informative introductory chapters setting the historical and narrative context of pictorial hagiography, Hahn considers the Lives of Martyrs and Virgins, Bishops, Monks and Abbots, and Kings and Queens, and concludes with an examination of the extraordinary chronicles and illustrations of the lives of saints by the English monk Matthew Paris. She considers such questions as: Why were illustrated saints' lives produced in such great numbers during this period? Why were they illustrated at all given the trouble and expense of such illustration? And to whom did the saints' lives appeal, and how did their readers use them?

As she addresses these and other intriguing questions, Hahn traces changes that occurred over time both in the images and the stories, and shows how their creators, mostly the intellectual elite, were finely attuned to audience reception. This important aspect of hagiographic production has received scant attention in the past, and as she considers this issue in light of contemporary narrative theory, Hahn brings us to a fresh appreciation of these intricately illustrated manuscripts and their multiple audiences.

A sweeping and original study of the structuring of sanctity in pictorial hagiography, Hahn’s book teases out the sophisticated rhetoric and imaginative independence of the illustrations to medieval lives of the saints. In systematically surveying the many ways in which narrative imagery reached out to and responded to a variety of audiences, Portrayed on the Heart will take its place among the most compelling studies of medieval narrative in any medium.—Jeffrey Hamburger, The Visual and the Visionary: Art and Female Spirituality in Late Medieval Germany and Nuns As Artists: The Visual Culture of a Medieval Convent

In her superb analysis of the development of hagiographic pictorial narrative, Cynthia Hahn has achieved both historical precision and critical nuance. It is the very best sort of interdisciplinary work, showing the complex symbiosis of visual and textual narrative. This is one of the handful of best books I have read about medieval sanctity. Thomas Head, editor of Medieval Hagiography: An Anthology

Cynthia Hahn's Portrayed on the Heart, richly and beautifully illustrated, is both scholarly and entertaining. It is an interpretive feat that makes hagiographic manuscripts come alive as a dynamic dialogue between text and image. In a sophisticated application of narrative theory to illustrated manuscripts, Hahn shows how images "speak" to a medieval audience, elicit responses that are more emotional than those to a written text, and function as devotional objects. Far from being "mere" illustrations, images can reshape the textual presentation of a saint, make visible spiritual struggles, turn readers into witnesses to sanctity, and even play a role in canonization proceedings. This is a wonderful book that deserves a wide readership. Renate Blumenfeld-Kosinski, Reading Myth: Classical Mythology and its Interpretations in Medieval French Literature