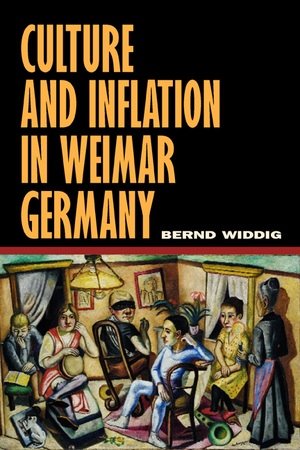 Culture and Inflation in Weimar Germany

For many Germans the hyperinflation of 1922 to 1923 was one of the most decisive experiences of the twentieth century. In his original and authoritative study, Bernd Widdig investigates the effects of that inflation on German culture during the Weimar Republic. He argues that inflation, with its dynamics of massification, devaluation, and the rapid circulation of money, is an integral part of modern culture and intensifies and condenses the experience of modernity in a traumatic way.

Bernd Widdig is Associate Professor of German Studies and Director of the MIT-Germany Program at the Massachusetts Institute of Technology. He is the author of Männerbünde und Massen: Zur Krise männlicher Identität in der Literatur der Moderne(1992).

"Bernd Widdig displays sharp intelligence and uncommon wit in this brilliant study of culture and inflation. Following the explosions in politics and culture that the inflation detonated from the end of World War I to the rise of the Nazis, this book is a bold and original meditation on modernity and money and the trauma of oblivion. It is a masterful, illuminating analysis."—Peter Fritzsche, author of Reading Berlin 1900

"Widdig's account of the cultural impact of the German hyperinflation adds an important dimension to the history of interwar Germany. He brings a unique perspective to the interaction between popular culture and political and economic decisions in the twentieth century. This fascinating book raises intriguing questions for economic and political historians."—Peter Temin, author of Lessons from the Great Depression

PART TWO: Money
4. Under the Sign of Zero: Money and Inflation