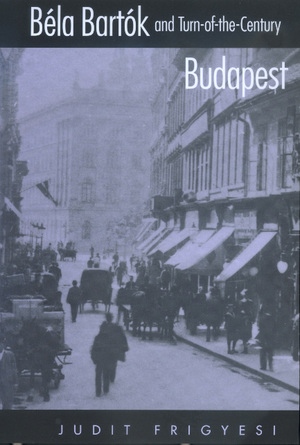 Bartók's music is greatly prized by concertgoers, yet we know little about the intellectual milieu that gave rise to his artistry. Bartók is often seen as a lonely genius emerging from a gray background of an "underdeveloped country." Now Judit Frigyesi offers a broader perspective on Bartók's art by grounding it in the social and cultural life of turn-of-the-century Hungary and the intense creativity of its modernist movement. Bartók spent most of his life in Budapest, an exceptional man living in a remarkable milieu. Frigyesi argues that Hungarian modernism in general and Bartók's aesthetic in particular should be understood in terms of a collective search for wholeness in life and art and for a definition of identity in a rapidly changing world. Is it still possible, Bartók's generation of artists asked, to create coherent art in a world that is no longer whole? Bartók and others were preoccupied with this question and developed their aesthetics in response to it. In a discussion of Bartók and of Endre Ady, the most influential Hungarian poet of the time, Frigyesi demonstrates how different branches of art and different personalities responded to the same set of problems, creating oeuvres that appear as reflections of one another. She also examines Bartók's Bluebeard's Castle, exploring philosophical and poetic ideas of Hungarian modernism and linking Bartók's stylistic innovations to these concepts.

"Outstanding. . . a significant achievement not only in Bartók research, but for its special perspective and its wealth of information and documentation regarding Hungarian culture and its relation to the broader European modern scene."—Elliott Antokoletz, author of The Music of Béla Bartók

"Béla Bartók and Turn-of-the-Century Budapest is an imaginative and powerful reinterpretation of Bartók's aesthetic achievement, which is presented as integrally related to its historical milieu in early twentieth-century Hungary. This is neither a conventional biography of Bartók, nor a systematic analysis of his musical oeuvre. Rather, it is a sustained interpretation of the meaning of Bartók's modernism and folklorism, within the context of Hungarian modernism. Few scholars besides Frigyesi, in or out of Hungary, possess the combination of skills necessary to write such a book and it will be a standard treatment of the subject for many years to come."—Mary Gluck, author of Georg Lukas and His Generation