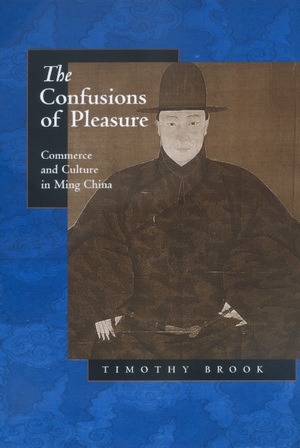 The Confusions of Pleasure Commerce and Culture in Ming China

The Ming dynasty was the last great Chinese dynasty before the Manchu conquest in 1644. During that time, China, not Europe, was the center of the world: the European voyages of exploration were searching not just for new lands but also for new trade routes to the Far East. In this book, Timothy Brook eloquently narrates the changing landscape of life over the three centuries of the Ming (1368-1644), when China was transformed from a closely administered agrarian realm into a place of commercial profits and intense competition for status.

The Confusions of Pleasure marks a significant departure from the conventional ways in which Chinese history has been written. Rather than recounting the Ming dynasty in a series of political events and philosophical achievements, it narrates this longue durée in terms of the habits and strains of everyday life. Peppered with stories of real people and their negotiations of a rapidly changing world, this book provides a new way of seeing the Ming dynasty that not only contributes to the scholarly understanding of the period but also provides an entertaining and accessible introduction to Chinese history for anyone.

Timothy Brook is Professor of History at the University of Toronto. He is the author of Praying for Power: Buddhism and the Formation of Gentry Society in Late-Ming China (1993), and Quelling the People: The Military Suppression of the Beijing Democracy Movement (1992), and the coeditor of Nation Work: Asian Elites and National Identities (1999) and China and Historical Capitalism: Genealogies of Sinological Knowledge (1999).

"This is joyful and comprehensive scholarship, full of motion and detail. Timothy Brook encases the fascinating and changeable world of the Ming dynasty (1368-1644) in a clear conceptual and chronological framework which any non-specialist can follow. Here are a wealth of Ming people and their problems, along with the very stuff of their world: bricks and bridges; markets, monasteries, and mail; famines and fashion; printing, passion, and portents. This is the first book we have in English that shows the whole shape of Ming life in all its ebullient complexity."—Jonathan Spence

Introduction: Seasons of the Ming (I609)

Winter: The First Century (1368-1450)
A Brick in the Wall
The Burden of Communication
Ideas into Texts
Economy and Exchange
The Distance between Rich and Poor