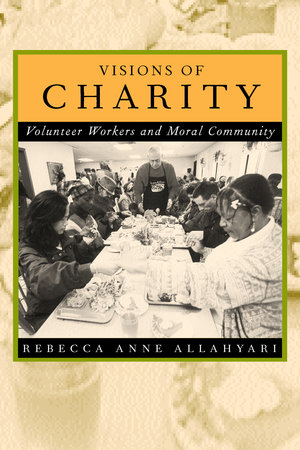 In the United States, public talk about charity for the poor is highly moralistic, even in our era of welfare reform. But how do we understand the actual experience of caring for the poor? This study looks at the front lines of volunteer involvement with the poor and homeless to assess what volunteer work means for those who do it. Rebecca Allahyari profiles volunteers at two charities—Loaves & Fishes and The Salvation Army—to show how they think about themselves and their work, providing new ways for discussing charity and morality.

Allahyari explores these agencies' differing ideological orientations and the raced, classed, and gendered contexts they provide volunteers for doing charitable work. Drawing on participant observation, intensive interviewing, and content analysis of organizational publications, she looks in particular at the process of self-improvement for these volunteers. The competing visions of charity Allahyari finds at these two organizations reveal the complicated and contradictory politics of caring for the poor in the United States today.

"The collapse of community and the death of character have become familiar laments, but few commentators offer positive solutions grounded in solid empirical research. Visions of Charity examines how people develop "moral selves" through acts of service to the needy. Through her balanced assessment of the moral meanings that volunteers attach to their service activities, Allahyari charts a way to reinvigorate our sense of community and character."—Robert Wuthnow, author of Loose Connections: Joining Together in America's Fragmented Communities

"People work hard to create their moral selves, and Rebecca Allahyari shows us many of the ways they do it. Visions of Charity describes the emotional processes and the creative processes as well as the moral rhetoric involved. The power of Allahyari's account comes from an unusual comparison between two Sacramento charities aiding the homeless, one a branch of the Salvation Army, the other a left-leaning Catholic organization. Because she did extensive fieldwork at each, she offers a fine-grained portrait of 'moral selving' from the bottom up. What is more-her experience forced her to abandon her initial expectations about which group treated the homeless with greater dignity and respect."—James M. Jasper, author of The Art of Moral Protest: Culture, Biography, and Creativity in Social Movements