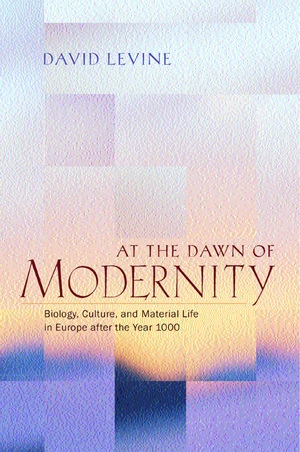 At the Dawn of Modernity Biology, Culture, and Material Life in Europe after the Year 1000

Looking at a neglected period in the social history of modernization, David Levine investigates the centuries that followed the year 1000, when a new kind of society emerged in Europe. New commercial routines, new forms of agriculture, new methods of information technology, and increased population densities all played a role in the prolonged transition away from antiquity and toward modernity.

At the Dawn of Modernity highlights both "top-down" and "bottom-up" changes that characterized the social experience of early modernization. In the former category are the Gregorian Reformation, the imposition of feudalism, and the development of centralizing state formations. Of equal importance to Levine's portrait of the emerging social order are the bottom-up demographic relations that structured everyday life, because the making of the modern world, in his view, also began in the decisions made by countless men and women regarding their families and circumstances. Levine ends his story with the cataclysm unleashed by the Black Death in 1348, which brought three centuries of growth to a grim end.

David Levine is Professor of Theory and Policy Studies at the University of Toronto. His previous books include Family Formation in an Age of Nascent Capitalism (1977), Poverty and Piety in an English Village: Terling, 1525-1700 (1979), Reproducing Families: The Political Economy of English Population History (1987), and The Making of an Industrial Society: Whickham, 1560-1765 (1992).

"He's done it again! No one else combines David Levine's deep knowledge of population processes, unforced mastery of Western European social history, quick eye for unlikely connections, graceful way with a phrase, and sheer enthusiasm for historical discovery. Read him for pleasure and illumination."—Charles Tilly, author of Durable Inequality