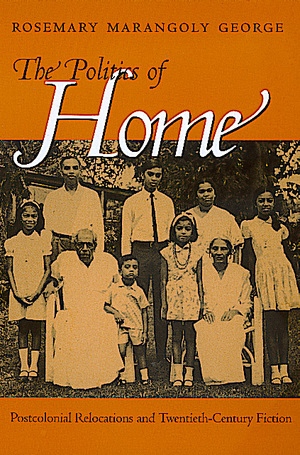 The Politics of Home Postcolonial Relocations and Twentieth-Century Fiction

The Politics of Home examines the changing representations of "home" in twentieth-century English literature. Examining imperial fiction, contemporary literary and cultural theory, and postcolonial narratives on belonging, exile and immigration, Rosemary Marangoly George argues that literary allegiances are always more complicated than expected and yet curiously visible in textual reformulations of "home." She reads English women's narration of their success in the empire against Joseph Conrad's accounts of colonial masculine failure, R. K. Narayan alongside Frederic Jameson, contemporary Indian women writers as they recycle the rhetoric of the British Romantic poets, Edward Said next to M. G. Vassanji and Jamaica Kincaid, and Conrad through Naipaul and Ishiguro.

Rosemary Marangoly George is Assistant Professor in the Literature Department at the University of California, San Diego, and the editor of Burning Down the House: Recycling Domesticity (1998).

"A groundbreaking move beyond the first generation of postcolonial criticism."—Nancy Armstrong, Brown University