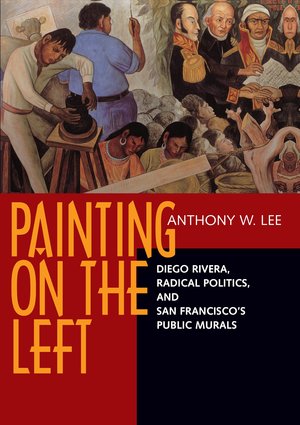 The boldly political mural projects of Diego Rivera and other leftist artists in San Francisco during the 1930s and early 1940s are the focus of Anthony W. Lee's fascinating book. Led by Rivera, these painters used murals as a vehicle to reject the economic and political status quo and to give visible form to labor and radical ideologies, including Communism.

Several murals, and details of others, are reproduced here for the first time. Of special interest are works by Rivera that chart a progress from mural paintings commissioned for private spaces to those produced as a public act in a public space: Allegory of California, painted in 1930-31 at the Stock Exchange Lunch Club; Making a Fresco, Showing the Building of a City, done a few months later at the California School of Fine Arts; and Pan American Unity, painted in 1940 for the Golden Gate International Exposition.

Labor itself became a focus of the new murals: Rivera painted a massive representation of a construction worker just as San Francisco's workers were themselves organizing; Victor Arnautoff, Bernard Zakheim, John Langley Howard , and Clifford Wight painted panels in Coit Tower that acknowledged the resolve of the dockworkers striking on the streets below. Radical in technique as well, these muralists used new compositional strategies of congestion, misdirection, and fragmentation, subverting the legible narratives and coherent allegories of traditional murals.

Lee relates the development of wall painting to San Francisco's international expositions of 1915 and 1939, the new museums and art schools, corporate patronage, and the concerns of immigrants and ethnic groups. And he examines how mural painters struggled against those forces that threatened their practice: the growing acceptance of modernist easel painting, the vagaries of New Deal patronage, and a wartime nationalism hostile to radical politics.

"Anthony Lee is quickly emerging as a key figure for a whole new generation of scholars. This book on Diego Rivera is significant not only for the notable new insights it yields, but also for the disciplinary shifts that it signals. Deftly written yet replete with a density of engaged meaning that inspires critical admiration, this new look at Rivera will remain an important stimulus in the field for quite a while."—David Craven, author of Diego Rivera: As Epic Modernist

"Microhistory at its best, Painting on the Left explores the fascinating and complex status of public murals in San Francisco during the early twentieth century. Lee's book is a rigorous and nuanced historical analysis of the murals, their patrons, and their publics (both real and imagined). In his finest moment, Lee reads Diego Rivera's three great murals in San Francisco, illuminating the motivations of their American patrons in hiring this foreign artist and demonstrating how Rivera's challenge to the decorative function and legible style of public murals dovetailed with radical politics." —Cecile Whiting, author of A Taste of Pop: Pop Art, Gender, and Consumer Culture

"This was a moment when painting mattered! In a deeply divided society, public art was a vector for contestation about what it was to be an American, a committed citizen, a moral being. With care and subtlety, and in fascinating detail, Lee shows how art, especially mural painting, became for a time the primary medium for the brokerage of power in the city of San Francisco itself. We see the murals afresh, we decipher the intense, sprawling, diversifying energies which shaped their now stilled surfaces. We might wish, these days, for a public art of similar consequence."—Terry Smith, author of Making the Modern: Industry, Art, and Design in America

"Anthony Lee's Painting on the Left raises discussion of art and politics in Depression America to a new level. His persuasive and original interpretation of mural painting in the San Francisco Bay Area, grounded in scrupulous research, relates pictorial choice to the complex interests of local elites, labor organizing, and Communist politics at this turbulent period of San Francisco's history. The analysis of politics is nuanced and satisfying, and it matches with an equally sophisticated address to pictorial form. The writing, too, is fluent and vivid. Here is one of those relatively rare books that fulfills the promise of the Social History of Art." —Andrew Frank Hemingway, Reader in the History of Art, University College of London