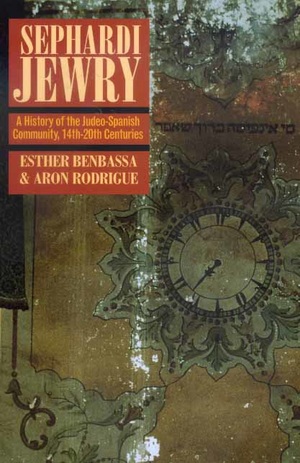 Sephardi Jewry A History of the Judeo-Spanish Community, 14th-20th Centuries

Until the publication of this remarkably comprehensive history of the Sephardi diaspora, only limited attention had been given to the distinctive Judeo-Spanish cultural entity that flourished in the Balkans and Asia Minor for more than four centuries. Yet the great majority of Sephardi Jews, after their expulsion from Spain in 1492 and subsequently from Portugal, found their way to this region, drawn by the political stability and relatively tolerant rule of the Ottoman Empire, as well as by promising socioeconomic conditions. Esther Benbassa and Aron Rodrigue show how Sephardi society and culture developed in the Levant, sharing language, religion, customs, and communal life as they did nowhere else, both during prosperous times and during the declining fortunes of the seventeenth and eighteenth centuries. The impact of westernization, the end of Ottoman power, and the rise of fragmenting nation-states transformed this vital community in the modern era. And, like many other Jewish communities, the unique Judeo-Spanish culture was dispersed and destroyed by the Holocaust and the migrations of the twentieth century. Sephardi Jewry presents its vivid history in a readable, well-documented narrative.

Esther Benbassa is Professor of Jewish History at the Université de Paris IV, Sorbonne, and Director of Research at the Centre National de Recherche Scientifique. Her books Jews in France (1999) and Haim Nahum (1995) are available in English. Aron Rodrigue is Eva Chernov Lokey Professor in Jewish Studies and Professor of History at Stanford University and the author of Images of Sephardi and Eastern Jewries in Transition (1993) and French Jews, Turkish Jews (1990).

Praise for the French edition:

"The most complete and thorough historical synthesis ever written in a European language on the Jewish communities of the Balkans and Turkey."—Michel Abitbol, L'arche

"A rich and too-little-known history that successfully avoids twin snares: the myth of the irreparable decadence of oriental Judaism and the myth of the lost golden age of Spain."—Alain Dieckhoff, Les Nouveaux Cahiers

"The authors illuminate the variety of responses--between the poles of westernizing and holding onto tradition--offered by these Jewish societies of the Levantine Sephardi cultural area to the processes of modernization, as well as their startling receptivity to the new ideologies of zionism and socialism that marked the end of the nineteenth century." —Annales

List of Maps
Note on Translation
Note on Transliteration and Place Names
Series Editor's Preface
Acknowledgments
Preface
Introduction
Prologue
Notes to the Prologue
1 Community and Society
2 Economy and Culture
3 Eastern Sephardi Jewry in the Era of Westernization
4 Paths of Politicization
5 The End of the Judea-Spanish Balkans: The Holocaust
and Migrations
Conclusion
Notes
Archival Sources
Newspapers and Periodicals
Select Bibliography
Index of Names and Places
Subject Index