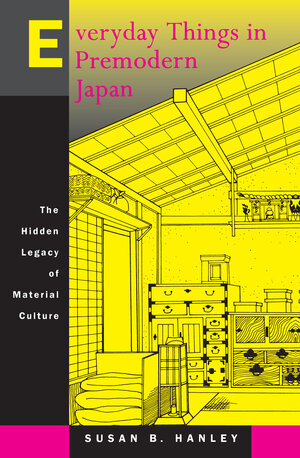 In the objects of everyday life--the material culture--during the Tokugawa (1600-1868) and Meiji (1868-1912) periods, Susan Hanley finds a compelling explanation for Japan's unique status as the only non-western nation to industrialize before 1900. While most economists have looked at the standard of living and concluded that the Japanese were relatively poor when they began to experience modern economic growth, Hanley shifts her focus to the quality of life in premodern Japan. She introduces a new indicator, "the level of physical well-being," which measures not only the standard of living (a fairly good predictor of physical well being at lower levels), but also the overall healthfulness of everyday life--an important determinant of human productivity. Hanley focuses on the basics of food, clothing, and shelter, along with heat, hygiene, and sanitation. She examines housing and furnishings, the wide variety of foods that were eaten with rice and other staple grains, and the development of urban sanitation and hygiene. She concludes that the diet, housing, and clothing of premodern Japan were not only simpler, less costly, and more resource-efficient than those in Europe, but also equally or more healthful. To document that life in eighteenth- and nineteenth-century Japan was at least as healthful as in the United States and Europe, particularly England, Hanley also examines demographic evidence that life expectancies in Japan and Europe were comparable throughout the nineteenth century. She concludes that Japanese enjoyed a much higher standard of living than has been previously understood. In substantiating her argument, Hanley investigates not only the period immediately before industrialization, but also the Tokogawa period, during which the groundwork was laid for the industrialization and modernization in the late nineteenth century after the Meiji Restoration. She traces the steady improvement in the quality of life in Japan that resulted from the diffusion of cotton for clothing and bedding, the addition of flooring, tatami, and closets to houses, and the development of new styles in cuisine, including the growing use of meat. She shows how the levels of income and health rose among commoners during the Tokogawa period. In particular, the disposal of wastes (including garbage and sewage) in cities, the sale of nightsoil as fertilizer (making it an economic good), the cleanliness of the water supply, and widespread practices of frequent bathing and drinking boiled water in the form of tea, made life in cities and towns more healthful than it was in urban Europe. To make the argument more accessible to a wide range of readers and to enable cross-cultural comparisons, the book contains a glossary of technical and culturally specific terms.
About the Book About the Author Reviews Table of Contents Related Books

Japan was the only non-Western nation to industrialize before 1900 and its leap into the modern era has stimulated vigorous debates among historians and social scientists. In an innovative discussion that posits the importance of physical well-being as a key indicator of living standards, Susan B. Hanley considers daily life in the three centuries leading up to the modern era in Japan. She concludes that people lived much better than has been previously understood—at levels equal or superior to their Western contemporaries. She goes on to illustrate how this high level of physical well-being had important consequences for Japan's ability to industrialize rapidly and for the comparatively smooth transition to a modern, industrial society.

While others have used income levels to conclude that the Japanese household was relatively poor in those centuries, Hanley examines the material culture—food, sanitation, housing, and transportation. How did ordinary people conserve the limited resources available in this small island country? What foods made up the daily diet and how were they prepared? How were human wastes disposed of? How long did people live? Hanley answers all these questions and more in an accessible style and with frequent comparisons with Western lifestyles. Her methods allow for cross-cultural comparisons between Japan and the West as well as Japan and the rest of Asia. They will be useful to anyone interested in the effects of modernization on daily life.

Susan B. Hanley is Professor of Japanese Studies and History at the University of Washington. She is coeditor of Family and Population in East Asian History (1985).

"A wonderfully original, cogently argued, and very readable book. Hanley provides persuasive answers to some of the largest questions historians have been asking about the relationship of premodern social and economic conditions to the modern development of Japan."—Stephen Vlastos, author of Peasant Protests and Uprisings in Tokugawa Japan