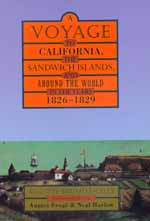 A Voyage to California, the Sandwich Islands, and Around the World in the Years 1826–1829

While French sea captain Auguste Duhaut-Cilly may not have become wealthy from his around-the-world travels between 1826 and 1829, his trip has enriched historians interested in early nineteenth-century California. Because of a poor choice in goods to trade he found it necessary to spend nearly two years on the Alta and Baja California coasts before disposing of his cargo and returning to France. What was bad luck for Duhaut-Cilly was good luck for us, however, because he recorded his impressions of the region's natural history and human populations in a diary. This translation of Duhaut-Cilly's writing offers today's readers a rare eyewitness account of the pastoral society that was Mexican California, including the missions at the height of their power.

A veteran of the Napoleonic wars, Duhaut-Cilly was an educated man conversant in Spanish and English. He was also Catholic, which gave him special access to the California missions. Thus his diary allows the reader an insider's view of the padres' lives, including their dealings with the military. Through his eyes we see the region's indigenous people and how they were treated, and we're privy to his commentary on the behavior of the Californios.

This translation also contains Duhaut-Cilly's account of the Sandwich Islands portion of his voyage and provides an authentic rendering of life at sea during the early nineteenth century. In the spirit of Richard Henry Dana's Two Years before the Mast, Duhaut-Cilly's reflections are a historical gem for anyone with a love of personal narratives and original accounts of the past.

Auguste Duhaut-Cilly was a nineteenth-century trader and explorer. August Frugé is the former Director of the University of California Press and author of A Skeptic among Scholars (California, 1993). Neal Harlow is the author of

"This is the definitive translation of the most important travel account of California before the American conquest. Duhaut-Cilly's observations are those of the outsider with the most insider access of any visitor. It is a lively read, endlessly fascinating for all those interested in the early history of the Golden State, and a natural supplement to all courses on its past."—James Sandos, author of Rebellion in the Borderlands

"The best contemporary account of the California missions prior to their secularization. Excellent writing as well as sensitive translation and good editing by two leading scholars make this historical study both informative and a very good read."—Norman Thrower, author of Sir Francis Drake and the Famous Voyage

"Thanks to this superb new translation, we can again feel Duhaut-Cilly's wonder and realism as he encountered a remote Mexican province whose destiny was at once obscure and exhilarating."—Kevin Starr, State Librarian of California

"A wonderful new English-language translation of Auguste Duhaut-Cilly's 1826 Voyage to California that gives us a very detailed set of observations on Indian-white relations in Alta and Baja California on the eve of the secularization of the missions."—Ramón A. Gutiérrez, coeditor of Contested Eden: California before the Gold Rush