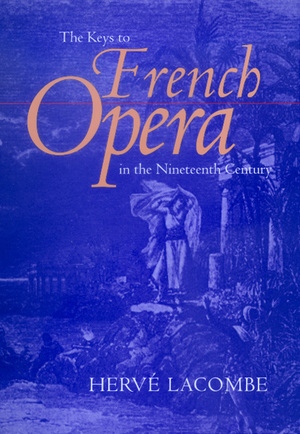 The Keys to French Opera in the Nineteenth Century

The "keys" provided by Hervé Lacombe in this richly informed book open the door to understanding the essence of nineteenth-century French lyric theater. Lacombe illuminates the diverse elements that constitute opera by focusing his investigation around three main categories: composition and production; words, music, and drama; and the interaction of society, genre, and aesthetics.

Lacombe chooses Bizet's Pearl Fishers (1863) as the exemplar of French opera that combines tradition and innovation. He uses Pearl Fishers as a paradigmatic point of reference for exploring questions of genesis, style, and aesthetic in other nineteenth-century French operatic works. French opera was a social art, he writes, and looping between past and future, between tradition and innovation, it achieved the seemingly impossible union of two antithetical aspects of Romanticism: the taste for theatricality and the desire for intimacy.

The voices of contemporary witnesses are heard throughout Lacombe's book. He makes abundant use of the writings of such musician-critics as Berlioz, Reyer, and Saint-Saëns and also draws on the works of many French writers, including Stendhal, Balzac, Baudelaire, and Zola. Illustrations showing costume sketches, scenery, posters, paintings, photographs, and magazine articles are attractive complements to discussions of particular operas. Together with Edward Schneider's accessible translation, the illustrations make this well-rounded and original study a trove of information for both music scholars and French historians.

Hervé Lacombe teaches at the University of Metz. He is working on another book about Bizet. Edward Schneider lives in New York and is a translator specializing in works about music and food.