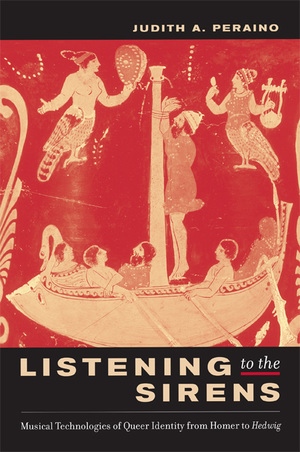 In this fresh and innovative study, Judith A. Peraino investigates how music has been used throughout history to call into question norms of gender and sexuality. Beginning with a close examination of the mythology surrounding the sirens—whose music seduced Ulysses into a state of mind in which he would gladly sacrifice everything for the illicit pleasures promised in their song—Peraino goes on to consider the musical creatures, musical gods and demigods, musical humans, and music-addled listeners who have been associated with behavior that breaches social conventions. She deftly employs a sophisticated reading of Foucault as an organizational principle as well as a philosophical focus to survey seductive and transgressive queerness in music from the Greeks through the Middle Ages and to the contemporary period. Listening to the Sirens analyzes the musical ways in which queer individuals express and discipline their desire, represent themselves, build communities, and subvert heterosexual expectations. It covers a wide range of music including medieval songs, works by Handel, Tchaikovsky and Britten, women's music and disco, performers such as Judy Garland, Melissa Etheridge, Madonna, and Marilyn Manson, and the movies The Rocky Horror Picture Show and Hedwig and the Angry Inch.

Judith A. Peraino is Associate Professor of Music at Cornell University.

"A wide-ranging and beautifully composed book. Peraino moves the argument to the next level, and the elegance of her prose pulls the reader along with her own siren song until the very last sentence."—Susan McClary, author of Modal Subjectivities

"Having mastered a daunting and thrilling array of materials—from the troubadour Arnaut Daniel through the disco queen Sylvester and beyond—Peraino brilliantly extends the range of what is considered musical text. Daring, original, and visionary, Listening to the Sirens is likely to become a classic among works that explore the sexual valences of cultural forms."—Carolyn Dinshaw, author of Getting Medieval: Sexualities and Communities, Pre- and Postmodern

"Queerly heterogeneous in structure, wide-ranging in content, and grounded in cultural theory from Foucault to Marcuse, this book produces surprising readings of both "classical" and vernacular musics that are sure to provoke lively—indeed, impassioned—discussion."—Suzanne G. Cusick, New York University