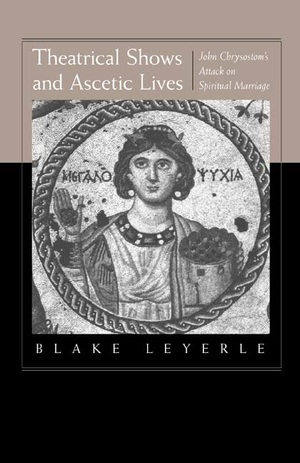 This book provides an original and rewarding context for understanding the prolific fourth-century Christian theologian John Chrysostom and the religious and social world in which he lived. Blake Leyerle analyzes two highly rhetorical treatises by this early church father attacking the phenomenon of "spiritual marriage." Spiritual marriage was an ascetic practice with a long history in which a man and a woman lived together in an intimate relationship without sex. What begins as an analysis of Chrysostom's attack on spiritual marriage becomes a broad investigation into Chrysostom's life and work, the practice of spiritual marriage itself, the role of the theater in late antique city life, and the early history of Christianity. Though thoroughly grounded in the texts themselves and in the cultural history of late antiquity, this study breaks new ground with its focus on issues of rhetoric, sexuality, and power.

Leyerle argues that Chrysostom used images and tropes drawn from the theater to persuade religious men and women that spiritual marriage was wrong. In addition to her analysis of the significance of the rhetorical strategies used by Chrysostom, Leyerle gives a thorough discussion of the role of the theater in late antiquity, particularly in Antioch, one of the gems among late antique cities. She also discusses gender in the context of late antique religion, shedding new light on early Christian attitudes toward sexuality. Throughout Leyerle weaves an ongoing conversation with contemporary theory in film and gender studies that gives her study an important analytic dimension.

Blake Leyerle is Associate Professor in the Department of Theology at the University of Notre Dame.

“Blake Leyerle has composed an elegant and nuanced analysis. . . Her fundamental insights are sure and sophisticated. . . There is much to admire in this book and many insights of lasting value."—Margaret Mitchell Journal Of Religion