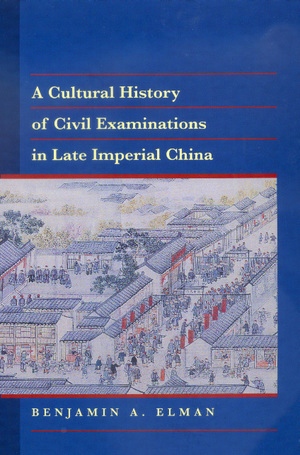 A Cultural History of Civil Examinations in Late Imperial China

In this multidimensional analysis, Benjamin A. Elman uses over a thousand newly available examination records from the Yuan, Ming, and Ch'ing dynasties, 1315-1904, to explore the social, political, and cultural dimensions of the civil examination system, one of the most important institutions in Chinese history. For over five hundred years, the most important positions within the dynastic government were usually filled through these difficult examinations, and every other year some one to two million people from all levels of society attempted them.

Covering the late imperial system from its inception to its demise, Elman revises our previous understanding of how the system actually worked, including its political and cultural machinery, the unforeseen consequences when it was unceremoniously scrapped by modernist reformers, and its long-term historical legacy. He argues that the Ming-Ch'ing civil examinations from 1370 to 1904 represented a substantial break with T'ang-Sung dynasty literary examinations from 650 to 1250. Late imperial examinations also made "Tao Learning," Neo-Confucian learning, the dynastic orthodoxy in official life and in literati culture. The intersections between elite social life, popular culture, and religion that are also considered reveal the full scope of the examination process throughout the late empire.

Benjamin A. Elman is Professor of Chinese History and Director of the Center for Chinese Studies at the University of California, Los Angeles; from 1999 to 2001 he will be a Visiting Professor at the School of Historical Studies at the Institute for Advanced Study. He is author of Classicism, Politics, and Kinship: The Ch'ang-chou School of New Text Confucianism in Late Imperial China (California, 1990; Chinese edition, 1998) and coeditor of Education and Society in Late Imperial China, 1600-1900 (California, 1994).

"A very important study of one of the most important institutions in Chinese history, one without which the China we have today would certainly be a vastly different place."—Peter Bol, author of "This Culture of Ours": Intellectual Transitions in T'ang and Sung China 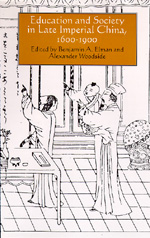