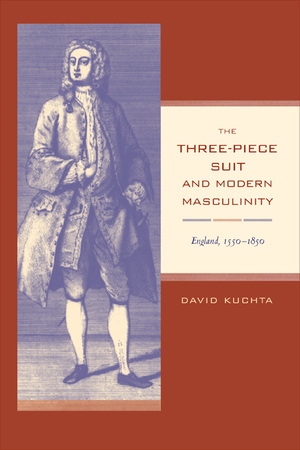 In 1666, King Charles II felt it necessary to reform Englishmen's dress by introducing a fashion that developed into the three-piece suit. We learn what inspired this royal revolution in masculine attire--and the reasons for its remarkable longevity--in David Kuchta's engaging and handsomely illustrated account. Between 1550 and 1850, Kuchta says, English upper- and middle-class men understood their authority to be based in part upon the display of masculine character: how they presented themselves in public and demonstrated their masculinity helped define their political legitimacy, moral authority, and economic utility. Much has been written about the ways political culture, religion, and economic theory helped shape ideals and practices of masculinity. Kuchta allows us to see the process working in reverse, in that masculine manners and habits of consumption in a patriarchal society contributed actively to people's understanding of what held England together.

Kuchta shows not only how the ideology of modern English masculinity was a self-consciously political and public creation but also how such explicitly political decisions and values became internalized, personalized, and naturalized into everyday manners and habits.

David Kuchta is Adjunct Professor of History at the University of New England.

"[This] is an important contribution to our understanding of the transformations in England's economic, political, and social order between 1550 and 1850. Kuchta handles his assumptions, sources, and arguments with sure-handed grace."—Susan Kingsley Kent, author of Gender and Power in Britain, 1640 to 1990

List of Illustrations
Acknowledgments
1. Conspicuous Constructions
2. The Old Sartorial Regime, 1550–1688
3. The Seventeenth-Century Fashion Crisis
4. The Three-Piece Suit
5. Masculinity in the "Age of Chivalry," 1688–1832
6. The Making of the Self-Made Man, 1750–1850
7. Inconspicuous Consumption
Notes
Bibliography