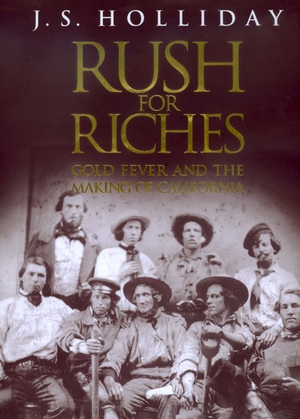 Rush for Riches Gold Fever and the Making of California

In this vivid account of the birth of modern California, J.S. Holliday frames the gold rush years within the larger story of the state's transformation from the quietude of a Mexican hinterland in the 1840s to the forefront of entrepreneurial capitalism by the 1890s. No other state, no nation experienced such an adolescence of freedom and success. By 1883 California was hailed as "America, only more so."

Holliday's boldly interpretive narrative has the authority and immediacy of an eyewitness account. This eminent historian recreates the masculine world of mining camps and rough cities, where both business and pleasure were conducted far from hometown eyes and conventional inhibitions. He follows gold mining's swift evolution from treasure hunt to vast industry; traces the prodigal plunder of California's virgin rivers and abundant forests; and describes improvised feats of engineering, breathtaking in their scope and execution.

Holliday also conjures the ambitious, often ruthless Californians whose rush for riches rapidly changed the state: the Silver Kings of the Comstock Lode, the timber barons of the Sierra forests, the Big Four who built the first transcontinental railroad, and the lesser profit-seekers who owned steamboats, pack mules, gambling dens and bordellos—and, most important for California's future, the farmers who prospered by feeding the rapidly growing population. This wildly laissez-faire economy created California's image as a risk-taking society, unconstrained by fear of failure.

The central theme of Rush for Riches is how, after decades of careless freedom, the miners were finally reined in by the farmers, and how their once mutually dependent relationship soured into hostility. This potential violence led to a dramatic courtroom decision in 1884 that shut down the mighty hydraulic mining operations—the end of California's free-for-all youthful exuberance.

Unique in its format, this beautiful book offers not only a compelling narrative but also almost two hundred fifty illustrations, one hundred in full color, that richly illuminate the themes and details of the text: daguerreotypes, photographs, paintings, lithographs, sketches, and specially drawn maps.

In Promontory, Utah, a dusty backwater town in the desert, America’s industrial nationalism had been secured for the decades to come.

J.S. Holliday (1924-2006), author of The World Rushed In: The California Gold Rush Experience (continuously in print since 1981), was the Director Emeritus of the California Historical Society and former Director of the Oakland Museum of California; Associate Professor of American History at California State University, San Francisco; and Assistant Director of the Bancroft Library, University of California, Berkeley. A popular lecturer, he appeared in several television documentaries, including Ken Burns's series "The West."

"J.S. Holliday—better than anyone, ever—has set forth in one volume the epic story of California's founding era. Here in rich language and full detail, in all the sweep and grandeur of history as social science and imaginative art, are chronicled the four decades of the nineteenth century that shaped California for all time to come."—Kevin Starr, author of Americans and the California Dream

"Holliday combines careful scholarship, a graceful writing style, and rich illustrations into a powerful narrative that encompasses a wide array of historical subjects—political, economic, technological, environmental, social, and cultural. . . . The author is an accomplished and widely acclaimed researcher and storyteller."—Malcolm J. Rohrbough, author of Days of Gold

"J.S. Holliday has produced a history as exciting as the gold rush itself. By carrying the narrative of this fascinating and complex event to the end of the century, he enables us to see its impact upon an urbanizing, industrializing America."—Joyce Appleby, coauthor of Telling the Truth about History