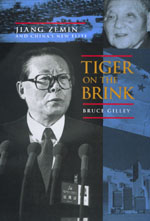 Tiger on the Brink Jiang Zemin and China's New Elite

This pathbreaking book is the first full-length study of the rise to power of Jiang Zemin, now the central figure in China's "third generation" of leaders. Tracing Jiang's beginnings as a student in the underground Communist movement in Shanghai through his appointment by Deng Xiaoping as party general secretary and his sudden elevation to central authority in the wake of the 1989 Tiananmen Massacre in Beijing, Bruce Gilley offers a fascinating and highly readable look at how Jiang Zemin has secured his position as one of the world's most powerful figures.

Gilley follows Jiang's life and career from his early years as the adopted son of a revolutionary martyr, through his training in Western science and engineering, to his emergence as what many believed would be an interim figurehead in the wake of Tiananmen. Gilley shows how Jiang instead persisted as China's key leader following the death of Deng Xiaoping: While he shared the concerns of the last of the Party elders—including their idealistic views of Chinese socialism—he also accommodated the younger generation of economic reformers who have helped China to achieve staggering growth in its domestic economy and foreign trade. Gilley's analysis of the careful and methodical transition of power from Deng to Jiang during the 1990s is a remarkable study in complexity and contrast, clearly illustrating Jiang's ability to either placate his allies and adversaries or ruthlessly exploit their weaknesses.

Based on first-hand interviews and primary documents as well as a variety of mainland Chinese and international media sources, Tiger on the Brink is an unprecedented and immensely revealing look into the highest echelons of Chinese politics on the eve of the twenty-first century, and will be of interest to anyone concerned with the world's most populous nation and its newest emerging superpower.

"An important book, which uses careful detective work to piece together an effective portrait of an extremely important world leader about whom we know very little."—Jeffrey Wasserstrom, author of Student Protests in Twentieth-Century China

"Gilley persuasively analyses Jiang Zemin as a political and social conservative and economic liberal. He never misses a chance to note important personalities who cross Jiang's path and is secure and incisive in describing the political background of events, including the Communist revolution, the Cultural Revolution, and Deng's reforms. Gilley's book tells us as much about this still-mysterious figure as it is currently possible to know."—Andrew J. Nathan, author of China's Transition

"An eye-opening biography of China's leader. This study provides a wealth of detail previously unknown about Jiang Zemin. Bruce Gilley's prose is engaging, his analysis penetrating, and his conclusions are reassuring for China's future and its international partners."—David Shambaugh, editor of Deng Xiaoping: Portrait of a Chinese Statesman

"In Tiger on the Brink Bruce Gilley provides the first convincing and well-documented account of exactly how Jiang Zemin rose to be China's leader. Especially interesting is the information on Jiang's political patrons, on the exact intersection of the events at Tiananmen with his own career rise, and on his breaking of Chen Xitong's Beijing-based political machine. Though much of Jiang's personality remains elusive, thanks to Gilley we can see Jiang as an often canny political operator, who made the most of the opportunities that came his way.—Jonathan D. Spence, author of God's Chinese Son


"Jiang Zemin has been an elusive figure not only because so much has remained unknown about his life, but because he has managed to avoid being laid low by the many political movements and factional feuds that have swept China since 1949. Bruce Gilley does a first-rate job in filling in many of these blanks. By doing so, he gives us the most comprehensive portrait to date of the man leading post-Deng Xiaoping China."—Orville Schell, author of Mandate of Heaven: The Legacy of Tiananmen Square and the Next Generation of China's Leaders

"Gilley has produced a fast-paced, readable book that captures the enigmatic essence of Jiang Zemin—the forces that shaped him, the struggles that sharpened him, and the circumstances that thrust him, unexpectedly, to the very pinnacle of power."—Richard Baum, Author of Burying Mao: Chinese Politics in the Age of Deng Xiaoping

"Written in a lively manner than captures attention, Tiger on the Brink is the first detailed study of Jiang Zemin, China's post-Deng leader, from his earliest years to the present. Well researched, vivid in its presentation, often bold in its analysis, and multi-faceted in its views of a critically important figure—for China and for us—this work warrants careful reading by those interested in contemporary China."—Robert A. Scalapino, author of The Last Leninists: The Uncertain Future of Asia's Communist States
Read More >