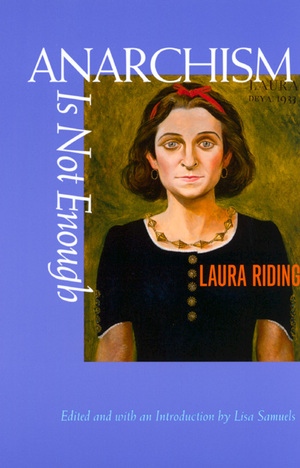 Anarchism is Not Enough is a manifesto against systematic thinking, a difficult book by a famously difficult writer. For the scope of its critical imagination, it is the most radical work of Laura Riding's early period. This period extends from the end of 1925, when she left America for Europe and Robert Graves, to 1939, the year she returned to America, renounced any further writing of poetry, and soon after married Schuyler Jackson.

Published in 1928, when Riding was twenty-seven, Anarchism is a kind of early autobiographia literaria. Long out of print and now available for the first time in paperback, this is one of the most imaginative and daring works of literary theory ever written by a modernist figure. Lisa Samuels's edition sets the work in its historical context and elucidates its central intellectual difficulties. Her introduction and notes are a valuable aid to an understanding of Riding's work.

Laura Riding was born Laura Reichenthal in 1901. She became a well-known and prolific poet, critic, and editor during her expatriate years (1926-1939) in Europe. She and Robert Graves ran the Seizin Press and collaborated on works including the influential A Survey of Modernist Poetry (1927). Riding's many books from these years include Contemporaries and Snobs; Poet: A Lying Word; The Life of the Dead; Progress of Stories, and her Collected Poems of 1938. After a long hiatus, she returned to publishing in 1972 with The Telling. She wrote steadily until her death in 1991. Lisa Samuels has published essays on poetry and literary theory as well as a book of poems, The Seven Voices (1998). She teaches contemporary poetry at the university of Wisconsin, Milwaukee.

"Of the half-dozen key theoretical documents of Modernism written in English, this book, and Stein's How to Write, are surely the most brilliant. The originality of Anarchism's thought seems hardly less arresting today than it was when first published 70 years ago. We owe Samuels a great debt for restoring this book to our attention."—Jerome McGann, University of Virginia

Acknowledgments
A Note on the Text
Creating Criticism: An Introduction to Anarchism Is Not Enough
Laura Riding: A Chronology
THE MYTH
LANGUAGE AND LAZINESS
THIS PHILOSOPHY
WHAT IS A POEM?
A COMPLICATED PROBLEM
ALL LITERATURE
MR. DOODLE-DOODLE-DOO
AN IMPORTANT DISTINCTION
THE CORPUS
POETRY AND MUSIC
POETRY AND PAINTING
POETRY AND DREAMS
JOCASTA
HOW CAME IT ABOUT?
HUNGRY TO HEAR
IN A CAFE
FRAGMENT OF AN UNFINISHED NOVEL
WILLIAM AND DAISY: FRAGMENT OF A FINISHED NOVEL
AN ANONYMOUS BOOK
THE DAMNED THING
LETTER OF ABDICATION
Notes on the Text
Appendix I. Three Commentaries on Anarchism Is Not Enough
Appendix II. Author to Critic: Laura (Riding) Jackson on 'Jlnarchism Is Not Enough"
Selected Bibliography of Works by Laura Riding
Selected Critical Bibliography