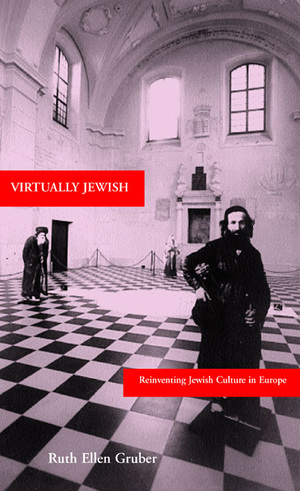 More than half a century after the Holocaust, in countries where Jews make up just a tiny fraction of the population, products of Jewish culture (or what is perceived as Jewish culture) have become very viable components of the popular public domain. But how can there be a visible and growing Jewish presence in Europe, without the significant presence of Jews? Ruth Ellen Gruber explores this phenomenon, traveling through Germany, Poland, the Czech Republic, Austria, Italy, and elsewhere to observe firsthand the many facets of a remarkable trend. Across the continent, Jewish festivals, performances, publications, and study programs abound. Jewish museums have opened by the dozen, and synagogues and Jewish quarters are being restored, often as tourist attractions. In Europe, at the beginning of the twenty-first century, klezmer music concerts, exhibitions, and cafes with Jewish themes are drawing enthusiastic--and often overwhelmingly non-Jewish--crowds.

In what ways, Gruber asks, do non-Jews embrace and enact Jewish culture, and for what reasons? For some, the process is a way of filling in communist-era blanks. For others, it is a means of coming to terms with the Nazi legacy or a key to building (or rebuilding) a democratic and tolerant state. Clearly, the phenomenon has as many motivations as manifestations. Gruber investigates the issues surrounding this "virtual Jewish world" in three specific areas: the reclaiming of the built heritage, including synagogues, cemeteries, and former ghettos and Jewish quarters; the representation of Jewish culture through tourism and museums; and the role of klezmer and Yiddish music as typical "Jewish cultural products." Although she features the relationship of non-Jews to the Jewish phenomenon, Gruber also considers its effect on local Jews and Jewish communities and the revival of Jewish life in Europe. Her view of how the trend has developed and where it may be going is thoughtful, colorful, and very well informed.

Ruth Ellen Gruber is the author of Upon the Doorposts of Thy House (1994) and Jewish Heritage Travel (1992/1999). She lives and writes in Italy and Hungary.

"A richly documented and insightful deliberation on the dilemma of what to do in places where Jewish culture once flourished, but Jews are no longer to be found or are very few in number.... Even where there seems to be a resurgence of Jewish life, it is fragile and fraught. At the same time, Jews from the United States and Israel have their own problematic relationship to the killing fields of Europe and to efforts to 'preserve' the last traces of a Jewish past. This is an altogether fascinating subject and no one is better prepared to write about it than Gruber."—Barbara Kirshenblatt-Gimblett, author of Destination Culture

"Virtually Jewish is a riveting exploration of a significant contemporary phenomenon. Half a century after the Holocaust and a decade after the fall of Communism, Europeans are grappling with the legacies of their past as they seek to redefine who they are. Combining firsthand reporting and informed analysis, Ruth Ellen Gruber opens the door to a fascinating and sometimes troubling reality. Above all, it's a good read."—Sylvia Poggioli, Senior European Correspondent, National Public Radio

"Ruth Gruber is absolutely the right person to describe the manufacture of virtual Jewish culture in present-day Europe. The phenomenon is tangled, fluid, and ever-changing, but this book, crammed with acute observations, unravels the subject and pins it down brilliantly. Here is a veritable gold mine of descriptive data. Subtle and nuanced in its presentation... Virtually Jewish is required reading for anyone interested in the contemporary Jewish world and will doubtless fascinate many people far beyond it."—Jonathan Webber, University of Oxford


"Virtually Jewish brilliantly and insightfully examines the big picture of Jewish culture in Europe today. Essential reading for anyone seriously interested in this topic, especially as it relates to the current klezmer music scene."—David Krakauer of Klezmer Madness!, internationally renowned musician and recording artist
Read More >