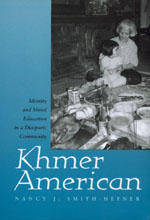 Khmer American Identity and Moral Education in a Diasporic Community

In the early 1980s, tens of thousands of Cambodian refugees fled their war-torn country to take up residence in the United States, where they quickly became one of the most troubled and least studied immigrant groups. This book is the story of that passage, and of the efforts of Khmer Americans to recreate the fabric of culture and identity in the aftermath of the Khmer holocaust.

Based on long-term research among Cambodians residing in metropolitan Boston, this rich ethnography provides a vivid portrait of the challenges facing Khmer American culture as seen from the perspective of elders attempting to preserve Khmer Buddhism in a deeply unfamiliar world. The study highlights the tensions and ambivalences of Khmer socialization, with particular emphasis on Khmer conceptions of personhood, morality, and sexuality. Nancy J. Smith-Hefner considers how this cultural heritage influences the performance of Khmer children in American schools and, ultimately, determines Khmer engagement with American culture.

"A richly detailed ethnography on Khmer social practices and concepts of socialization in the diaspora community that is unparalleled in the English language."—Kate Frieson, University of Victoria

Preface
Acknowledgments
A Note on Transliteration

1: Identity and Transition
2: To Be Khmer Is to Be Buddhist
3: Early Socialization: Observing the Child
4: Moral Education: The Child within the Family
5: Schooling in America
6: Sexuality and Marriage
7: The Search for the Middle Path