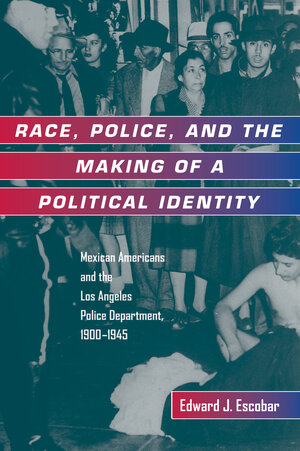 Race, Police, and the Making of a Political Identity Mexican Americans and the Los Angeles Police Department, 1900-1945

In June 1943, the city of Los Angeles was wrenched apart by the worst rioting it had seen to that point in the twentieth century. Incited by sensational newspaper stories and the growing public hysteria over allegations of widespread Mexican American juvenile crime, scores of American servicemen, joined by civilians and even police officers, roamed the streets of the city in search of young Mexican American men and boys wearing a distinctive style of dress called a Zoot Suit. Once found, the Zoot Suiters were stripped of their clothes, beaten, and left in the street. Over 600 Mexican American youths were arrested. The riots threw a harsh light upon the deteriorating relationship between the Los Angeles Mexican American community and the Los Angeles Police Department in the 1940s.

Edward J. Escobar is Associate Professor in the Departments of Chicana and Chicano Studies and History at Arizona State University, and coeditor of Forging a Community: The Latino Experience in Northwest Indiana, 1919-1975 (1987).