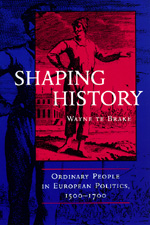 As long as there have been governments, ordinary people have been acting in a variety of often informal or extralegal ways to influence the rulers who claimed authority over them. Shaping History shows how ordinary people broke down the institutional and cultural barriers that separated elite from popular politics in sixteenth- and seventeenth-century Europe and entered fully into the historical process of European state formation. Wayne te Brake's outstanding synthesis builds on the many studies of popular political action in specific settings and conflicts, locating the interaction of rulers and subjects more generally within the multiple political spaces of composite states. In these states, says Te Brake, a broad range of political subjects, often religiously divided among themselves, necessarily aligned themselves with alternative claimants to cultural and political sovereignty in challenging the cultural and fiscal demands of some rulers. This often violent interaction between subjects and rulers had particularly potent consequences during the course of the Reformation, the Counter-Reformation, and the Crisis of the Seventeenth Century. But, as Te Brake makes clear, it was an ongoing political process, not a series of separate cataclysmic events. Offering a compelling alternative to traditionally elite-centered accounts of territorial state formation in Europe, this book calls attention to the variety of ways ordinary people have molded and shaped their own political histories.

Wayne te Brake, Professor of History at Purchase College, State University of New York, is author of Regents and Rebels: The Revolutionary World of an Eighteenth-Century Dutch City (1989), and coeditor of Challenging Authority: The Historical Study of Contentious Politics (1998).

"A superb synthesis of popular politics in early modern western and central Europe. . . . Te Brake has cut across the barriers to find common properties and principles of variation in the politics of ordinary people."—Charles Tilly, Columbia University

I
Breaking and Entering