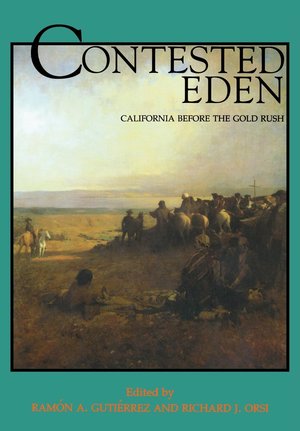 Contested Eden California Before the Gold Rush, Published in Association with the California Historical Society

Celebrating the 150th birthday of the state of California offers the opportunity to reexamine the founding of modern California, from the earliest days through the Gold Rush and up to 1870. In this four-volume series, published in association with the California Historical Society, leading scholars offer a contemporary perspective on such issues as the evolution of a distinctive California culture, the interaction between people and the natural environment, the ways in which California's development affected the United States and the world, and the legacy of cultural and ethnic diversity in the state.

California before the Gold Rush, the first California Sesquicentennial volume, combines topics of interest to scholars and general readers alike. The essays investigate traditional historical subjects and also explore such areas as environmental science, women's history, and Indian history. Authored by distinguished scholars in their respective fields, each essay contains excellent summary bibliographies of leading works on pertinent topics. This volume also features an extraordinary full-color photographic essay on the artistic record of the conquest of California by Europeans, as well as over seventy black-and-white photographs, some never before published.