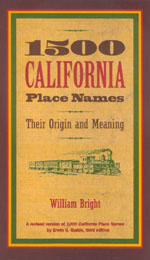 Names of the major Indian tribes of California are included, since some of them have been directly adapted as place names and others have been the source of a variety of names. Bright incorporates his own recent research and that of other linguists and local historians, giving us a much deeper appreciation of the tangled ancestry many California names embody. Featuring phonetic pronunciations for all the Golden State's tongue-twisting names, this is in effect a brand new book, indispensable to California residents and visitors alike.

William Bright is Professor Adjoint in Linguistics at the University of Colorado, Boulder, and author of numerous books including A Coyote Reader (California, 1993). He edited the four-volume International Encyclopedia of Linguistics (1991), as well as the revised, unabridged California Place Names (California, 1998).