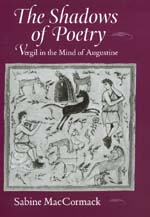 The Shadows of Poetry Vergil in the Mind of Augustine

Imperial ceremony was a vital form of self-expression for late antique society. Sabine MacCormack examines the ceremonies of imperial arrivals, funerals, and coronations from the late third to the late sixth centuries A.D., as manifest in the official literature and art of the time. Her study offers us new insights into the exercise of power and into the social, political, and cultural significance of religious change during the Christianization of the Roman world.

Sabine G. MacCormack is Professor of History at the University of Michigan, Ann Arbor.