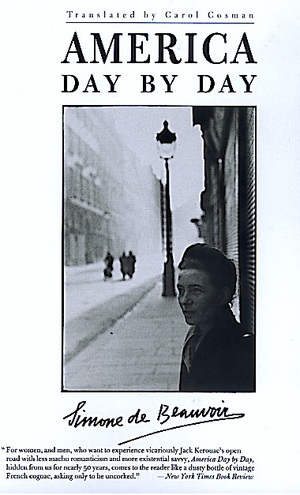 Here is the ultimate American road book, one with a perspective unlike that of any other. In January 1947 Simone de Beauvoir landed at La Guardia airport and began a four-month journey that took her from one coast of the United States to the other, and back again. Embraced by the Condé Nast set in a swirl of cocktail parties in New York, where she was hailed as the "prettiest existentialist" by Janet Flanner in The New Yorker, de Beauvoir traveled west by car, train, and Greyhound, immersing herself in the nation's culture, customs, people, and landscape. The detailed diary she kept of her trip became America Day by Day, published in France in 1948 and offered here in a completely new translation. It is one of the most intimate, warm, and compulsively readable texts from the great writer's pen.

Fascinating passages are devoted to Hollywood, the Grand Canyon, New Orleans, Las Vegas, and San Antonio. We see de Beauvoir gambling in a Reno casino, smoking her first marijuana cigarette in the Plaza Hotel, donning raingear to view Niagara Falls, lecturing at Vassar College, and learning firsthand about the Chicago underworld of morphine addicts and petty thieves with her lover Nelson Algren as her guide. This fresh, faithful translation superbly captures the essence of Simone de Beauvoir's distinctive voice. It demonstrates once again why she is one of the most profound, original, and influential writers and thinkers of the twentieth century.

On New York:"I walk between the steep cliffs at the bottom of a canyon where no sun penetrates: it's permeated by a salt smell. Human history is not inscribed on these carefully calibrated buildings: They are closer to prehistoric caves than to the houses of Paris or Rome."

On Los Angeles:"I watch the Mexican dances and eat chili con carne, which takes the roof off my mouth, I drink the tequila and I'm utterly dazed with pleasure."

Simone de Beauvoir (1908-1986) is the author of many books, among them The Second Sex (1949) and The Mandarins (1954), which won the Prix Goncourt. Carol Cosman is a freelance translator who has also translated Jean-Paul Sartre's The Family Idiot: Gustave Flaubert, 1821-1857. Douglas Brinkley is a Professor of History at the University of New Orleans and the author of a forthcoming biography of Jimmy Carter.

"The author of this ravishing book is the novelist in Simone de Beauvoir at thirty-something. Her travel diary records—with fresh, hungry, sensuous curiosity—the cultural climate of postwar America just before the Cold War closed down. No writer could be better company in that complex, vanished world than Simone de Beauvoir."—Diane Middlebrook

"Simone de Beauvoir in NY in 1947: Like all Europeans she begins to lament the obvious—the hard edges, the crude self-involvement, the absence of café life—and then suddenly she gives herself up to the aloneness of the city with a responsiveness astonishing for the brilliance it generates. Fifty years later it is still exciting to be in her company as she discovers unexpected love for the capital of the new world."—Vivian Gornick