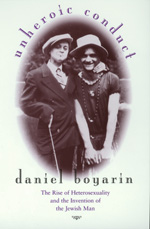 In a book that will both enlighten and provoke, Daniel Boyarin offers an alternative to the prevailing Euroamerican warrior/patriarch model of masculinity and recovers the Jewish ideal of the gentle, receptive male. The Western notion of the aggressive, sexually dominant male and the passive female reaches back through Freud to Roman times, but as Boyarin makes clear, such gender roles are not universal. Analyzing ancient and modern texts, he reveals early rabbis—studious, family-oriented—as exemplars of manhood and the prime objects of female desire in traditional Jewish society.

Challenging those who view the "feminized Jew" as a pathological product of the Diaspora or a figment of anti-Semitic imagination, Boyarin argues that the Diaspora produced valuable alternatives to the dominant cultures' overriding gender norms. He finds the origins of the rabbinic model of masculinity in the Talmud, and though unrelentingly critical of rabbinic society's oppressive aspects, he shows how it could provide greater happiness for women than the passive gentility required by bourgeois European standards.

Boyarin also analyzes the self-transformation of three iconic Viennese modern Jews: Sigmund Freud, the father of psychoanalysis; Theodor Herzl, the founder of Zionism; and Bertha Pappenheim (Anna O.), the first psychoanalytic patient and founder of Jewish feminism in Germany. Pappenheim is Boyarin's hero: it is she who provides him with a model for a militant feminist, anti-homophobic transformation of Orthodox Jewish society today.

Like his groundbreaking Carnal Israel, this book is talmudic scholarship in a whole new light, with a vitality that will command attention from readers in feminist studies, history of sexuality, Jewish culture, and the history of psychoanalysis.

Daniel Boyarin is Taubman Professor of Talmudic Culture at the University of California, Berkeley, and author of Carnal Israel: Reading Sex in Talmudic Culture (California, 1993) and A Radical Jew: Paul and the Politics of Identity (California, 1994). Chapter 5 of Unheroic Conduct, "Freud's Baby, Fliess's Maybe; Or, Male Hysteria, Homophobia, and the Invention of the Jewish Man," received the Crompton-Noll Award of the Modern Language Association Gay and Lesbian Caucus.

"Daniel Boyarin's work has been instrumental in opening a way for me into Jewish thinking, Jewish history, and Judaism itself. . . . His is a thoroughly dazzling intellect: a scholar, a critical and political thinker, a wit, and a wonderful, passionate writer." —Tony Kushner, author of Angels in America

"Few commentators on the vexed issue of Judaism and gender bring as much passion, courage, and audacity to their work as does Daniel Boyarin. . . . Whatever his or her religious and sexual identity, the reader of Unheroic Conduct cannot fail to be touched by the explosive power of what Boyarin impishly calls 'Jewissance.'"—Martin Jay, author of Downcast Eyes

"Whether citing the ancient Sage Johanon, taking issue with the Zionist Theodor Herzl, or approving the feminist Bertha Pappenheim, Boyarin invites his readers into a lively, generous, and often humorous debate. Here Orthodox Judaism is both celebrated and transformed." —Natalie Zemon Davis, author of Women on the Margins

PART ONE: MEN WHO ROAM WITH THE SHEEP:
DIASPORA AND THE IMAGE OF THE JEWISH MAN

I. Goyim Naches;
Or, the Mentsh and the Jewish Critique of Romance

2. Jewish Masochism:
On Penises and Politics, Power and Pain

3· Rabbis and Their Pals:
Rabbinic Homosociality and the Lives of Women

4· Femminization and Its Discontents:
Torah Study as a System for the Domination of Women

PART TWO: THE RISE OF HETEROSEXUALITY AND
THE INVENTION OF THE MODERN JEW

5· Freud's Baby, Fliess's Maybe;
Or, Male Hysteria, Homophobia, and the
Invention of the Jewish Man

6. "You May Not Tell the Boys":
The Diaspora Politics of a Bitextual Jew

8. Retelling the Story of 0.;
Or, Bertha Pappenheim, My Hero