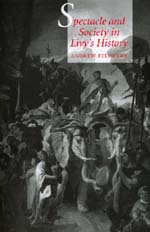 Spectacle and Society in Livy's History

Public spectacle—from the morning rituals of the Roman noble to triumphs and the shows of the Arena—formed a crucial component of the language of power in ancient Rome. The historian Livy (c. 60 B.C.E.-17 C.E.), who provides our fullest description of Rome's early history, presents his account of the growth of the Roman state itself as something to be seen—a visual monument and public spectacle. Through analysis of several episodes in Livy's History, Andrew Feldherr demonstrates the ways in which Livy uses specific visual imagery to make the reader not only an observer of certain key events in Roman history but also a participant in those events. This innovative study incorporates recent literary and cultural theory with detailed historical analysis to put an ancient text into dialogue with contemporary discussions of visual culture.

In Spectacle and Society in Livy's History, Feldherr shows how Livy uses the literary representation of spectacles from the Roman past to construct a new sense of civic identity among his readers. He offers a new way of understanding how Livy's technique addressed the political and cultural needs of Roman citizens in Livy's day. In addition to renewing our understanding of Livy through modern scholarship, Feldherr provides a new assessment of the historian's aims and methods by asking what it means for the historian to make readers spectators of history.

Andrew Feldherr is Assistant Professor of Classics at Princeton University.

"An exciting and sophisticated approach to a major author in the Latin canon who has been much ignored. Feldherr's writing is clear and intelligent and admirably reflects his engagement in the material. The close analysis is extraordinarily perceptive and innovative—a real pleasure to read."—Ann Vasaly, author of Representations

"[Feldherr] persuasively establishes civic spectacle as a broad category under which to examine the rhetorical strategies of both the makers and the writers of history."—Ralph Hexter, University of California, Berkeley