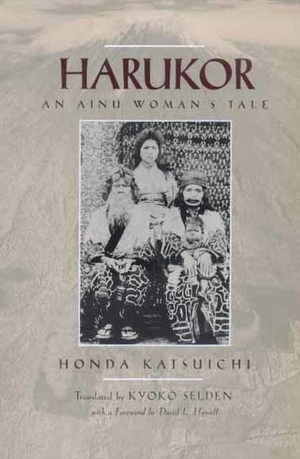 In this engaging tale, Honda Katsuichi reconstructs the life of an Ainu woman living on the northern island of Japan over five hundred years ago. Harukor's story, created from surviving oral accounts of Ainu life and culture as well as extensive scholarly research, is set in the centuries before the mainland Japanese nearly destroyed the way of life depicted here.

In the first person, the fictional Harukor tells us of her childhood, her adolescence, and her motherhood, drawing on tales and songs performed by her grandmother and other bards. She describes festivals, weddings, childbirth and midwifery, traditional healing methods, battles, and funerals in detail. Her story is followed by the adventures of her oldest son, Pasekur, which end by foreshadowing an early Ainu rebellion against Japanese encroachment.

Amply illustrated and prefaced by an extensive introduction to Ainu history, the natural surroundings, and the sources used to construct Harukor and her world, this volume is a unique portrait of Ainu gods and humans, of matters sacred and mundane, and of the distinctive Ainu respect for nature's bounty.

Honda Katsuichi is a journalist and writer who worked for many years at the Asahi Shinbun, Japan's leading newspaper. He is the author of more than thirty works in Japanese, including books on the Ainu, the Nanjing Massacre, and Japanese society. Kyoko Selden is Senior Lecturerin the Department of Modern Languages at Cornell University. Her translations include Kayano Shigeru's, Our Land Was a Forest: An Ainu Memoir (1994). David L. Howell is Associate Professor of History at Princeton University.