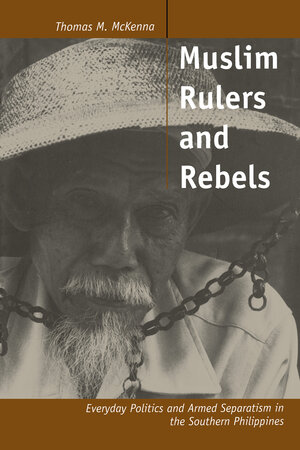 In this first ground-level account of the Muslim separatist rebellion in the Philippines, Thomas McKenna challenges prevailing anthropological analyses of nationalism as well as their underlying assumptions about the interplay of culture and power. He examines Muslim separatism against a background of more than four hundred years of political relations among indigenous Muslim rulers, their subjects, and external powers seeking the subjugation of Philippine Muslims. He also explores the motivations of the ordinary men and women who fight in armed separatist struggles and investigates the formation of nationalist identities. A skillful meld of historical detail and ethnographic research, Muslim Rulers and Rebels makes a compelling contribution to the study of protest, rebellion, and revolution worldwide.

Thomas M. McKenna is Assistant Professor of Anthropology, University of Alabama at Birmingham.

"Thomas McKenna has provided the first convincing explanation of a major insurgency that continued on its bloody course for nearly a quarter century. Given the enormous complexity of the revolt, the patchwork of ethnicities involved, and the opaque quality of the literature, McKenna's accomplishment is a considerable one."—Alfred W. McCoy, author of The Politics of Heroin in Southeast Asia

"Superb as both ethnography and social history . . . offers significant new insights into the changing direction of Muslim politics in the Philippines and how to understand comparable movements elsewhere. It will be a basic reference for those interested in the dynamics of ethnoreligious political movements in general."—Dale Eickelman, author of Knowledge and Power

List of Illustrations and Tables
Acknowledgments
Introduction: Extraordinary and Everyday
Politics in the Muslim Philippines
1. The Politics of Heritage
2. People and Territory in Cotabato
3· Islamic Rule in Cotabato
4· European Impositions and the Myth of Morohood
5· America's Moros
6. Postcolonial Transitions
7. Muslim Separatism and the Bangsamoro Rebellion
8. Regarding the War from Campo Muslim
9· Unarmed Struggle
1O. Muslim Nationalism after Marcos
11. Resistance and Rule in Cotabato
Notes
Glossary
Bibliography
Index