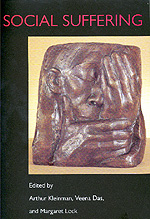 "Social suffering" takes in the human consequences of war, famine, depression, disease, torture—the whole assemblage of human problems that result from what political, economic, and institutional power does to people—and also human responses to social problems as they are influenced by those forms of power. In the same way that the notion of social suffering breaks down boundaries between specific scholarly disciplines, this cross-disciplinary investigation allows us to see the twentieth century in a new frame, with new emphases.

Anthropologists, historians, literary theorists, social medicine experts, and scholars engaged in the study of religion join together to investigate the cultural representations, collective experiences, and professional and popular appropriations of human suffering in the world today. These authors contest traditional research and policy approaches. Recognizing that neither the cultural resources of tradition nor those of modernity's various programs seem adequate to cope with social suffering in our times, they base their distinctive vision on the understanding that moral, political, and medical issues cannot be kept separate.